My original intention was to take a break during this holiday season from writing, however with what we are seeing with Iranian filmmaker Jafar Panahi and fellow filmmaker Muhammad Rasoulof being sentenced to six years each in Iranian jails for making films is not only an outrage for cinema but much more importantly for basic human rights. Being silent is not definitely not an option.

On December 20th, 2010 Jafar Panahi and Muhammad Rasoulof were sentenced by the Iranian government to serve six years in prison for making a film about the Ahmadinejad election. Also part of the sentence are the stipulations that Mr. Panahi not make films, write screenplays, grant interviews or leave Iran for twenty years. Jafar is currently fifty years old so you can take those stipulations to their logical conclusion. You can read more about the case from this L.A. Times article here.

I strongly urge you to take a second to add your name to a petition demanding the release of Jafar Panahi.

There are many petitions online, here is a link to one of them. Petition.

Adding your name to a petition is not only demanding freedom for Mr. Panahi but for all political prisoners of the current Iranian government.

Here is a video I found to give you a glimpse of what life - if you can still call it that - is like inside Iranian prison.

Posted by Robert Aaron Mitchell at 6:16 PM No comments:

A Year Without Rent - My Interview with Lucas McNelly

To say that social media has become a great tool for independent filmmakers would be a vast understatement. It has made the undertakings such as marketing, raising a budget, to just meeting one another and sharing stories just a little bit easier.

It was through Facebook that I first met filmmaker Lucas McNelly, who at that time was based out of Pittsburgh. It was not too long that I began to see the progress of his first feature film Blanc de Blanc show up in my news feed. I have been watching his progress from making Blanc de Blanc to the near impossible task of having a low budget film play theatrically. 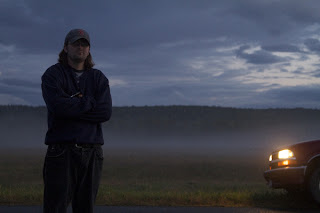 Lucas has followed up his first feature with his second film Up Country which is currently in post production. While this is going on he is also transversing America on his latest project A Year Without Rent. The A Year Without Rent film project really piqued my interest and I thought it was a such a great idea that I wanted more people to find out about it. Without further ado here is my recent conversation with Lucas McNelly

1) First as a means of introduction could you talk about the features you have directed, Blanc le Blanc and now Up Country?

I've directed two features. Blanc de Blanc (www.blancdeblancfilm.com) was part of the #2wkfilm project, where a couple of filmmakers challenged each other to shoot and edit a feature film in just two weeks. What we ended up with was a mystery about a guy who shows up in Pittsburgh, meets a girl, and then his past shows up. Considering the obvious limitations, it ended up a lot better than it could have been. It's a rare mystery in that we don't solve the mystery for the audience. So far, 8 people have figured it out on their own. But, we've gotten a ton of really interesting theories.

Up Country is a thriller that is currently being edited. It's about 3 guys from the city who hire a guide to take them fishing in the Northern Maine woods. The guide abandons them in the woods and steals their gear, leaving them to fend for themselves. We shot it in the middle of nowhere on a tiny $4k budget with a cast and crew brought in from around the country. We're pretty excited. 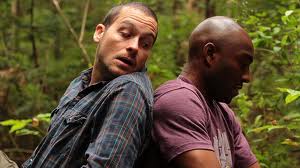 I think one thing I've learned is how to give up control without sacrificing vision. On L'Attente, I did everything. One thing I've tried to do since then is find people who are better than I am to do things like DP or sound. Similarly, I've found that while it's a lot of fun to hear actors say your words verbatim, and it's a great ego boost, the better you cast your actors, the more control over the dialogue you can give to them. And, really, the more you give up, the deeper that dialogue gets. Of course, that can easily become a disaster, so you have to be careful.

3) What are the challenges you have faced trying to get your films seen? How have you tried to overcome these challenges?

There's a ton of stuff out there people can watch, new stuff and old, so I don't know exactly how you overcome that consistently. Really, you just have to keep plugging away at it. People are busy. It seems the best method is to get connected with people and spread the net a little bit further each time. But, I don't know if there's a magic formula. If there is, I certainly haven't found it.

4) What is the Year Without Rent film project? How was this idea conceived?

Like all of my ideas worth a damn, A Year Without Rent started as a half-assed theory. When I was making Up Country, we brought in people from out of town. At the same time, I had friends doing other films around the country. It occurred to me that the hardest part of getting people from out of town involved was the travel, so how cool would it be to solve that? 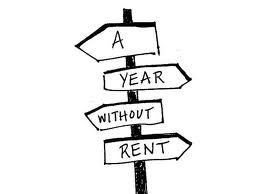 The idea basically was that if someone could travel around the country and volunteer on films all over the place, just that extra set of hands would be a huge help to those films. And really the only way it could be more helpful than that is if that person also helped promote the film as it was being made.

I'm rambling a little bit, but essentially I'm gonna spend a year traveling around the country, working on indie films, stopping at festivals, and basically exploring the landscape of indie film. Along the way I'm going to document the process through video, photos, and good old fashioned blog posts. What we'll do is look at indie filmmakers, seeing how filmmakers around the country work, how they operate, stuff like that. Just how mobile does social media make us? Do we need to live in NYC or LA to function?

It's a big, sprawling project. At the end, we'll compile the whole thing into an eBook (or whatever is cool a year from now). And hopefully we'll be able to help out a bunch of filmmakers in the process.

Right now we're raising money on Kickstarter (http://kck.st/dExFQg). The perks are pretty awesome, and hopefully they'll keep the audience involved throughout the year.

5) What do you hope to achieve with this project? How do people get involved?

Really, the project will only be as good as the film community lets it be. The more people and projects that are involved, the better it will be. The bigger the audience gets, the more benefit there is for the films. We're hoping to add people to the project for short stretches, as possible.

People can get involved in a couple of ways:

3. If you want to get involved in a more tangible way, there's a bunch of different ways to contact us. Either via twitter (@lmcnelly or @YearWithoutRent) or emailing us ayearwithoutrent [at] gmail.com. Really, we're pretty easy to contact. And we're super nice.

6) What advice would you offer to people struggling in the goal of trying to realize their films?

There's going to be 5 or 6 points in nearly every film where the whole thing teeters on the edge of collapse. That's natural. The difference sometimes between success and failure can be little more than just being too stubborn to give up. For example, on Up Country at one point we lost our lead actor and DP on the same day. But, we just shrugged it off and found someone else. You can't get discouraged. Well, you can, but you can't give up. And if the film falls apart, start working on the next one.
Posted by Robert Aaron Mitchell at 6:13 PM No comments: