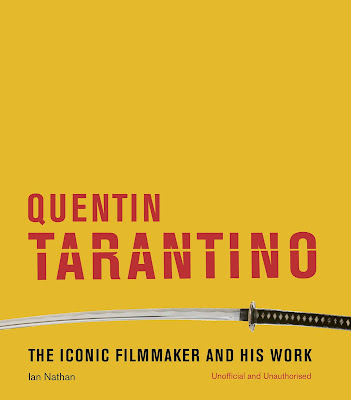 As the old adage goes, "One should not judge a book by it's cover" that went out the window when Ian Nathan's book on Quentin Tarantino arrived at my office. The book takes it's color scheme and font from Tarantino's Kill Bill complete with the image of Japanese steel from Okinawa. As if that wasn't stylish and striking enough the book also has a slip case. These stylistic choices are fitting for a book about one of the most stylistic directors to call out "action!" working today.

"I didn't go to film school, I went to films." - Quentin Tarantino

Anyone who has ever watched an interview with Tarantino can attest to, he talks in rapid fire encyclopedic cinema references with a lot of ego and is extremely quotable. Nathan's book excels at peppering the book with quotes. The above quote is the first sentences you read in the book and are located in the contents page. There are ten quotes in the contents page for the ten sections of the book and this cannot be a happenstance structure as it has long been mythologized that Quentin will craft ten films and retire from film making.

Speaking of mythology the first section in the book entitled Video Archives gets into the talking points about the Tarantino's beginnings. Nathan asks "Why is Quentin Quentin?" he then takes us on the journey from Tarantino's earliest years in Knoxville, Tennessee and the talk of his grandfather being a bootlegger to his growing up in the neighborhood of Torrance south of Los Angeles. As well as Tarantino's first jobs at the Pussycat Theater to Video Archives. The first chapter also details some of Tarantino's many cinematic and television influences.

Another standout chapter begins with another quote "I think of them as like old girlfriends..." and chronicles Natural Born Killers, True Romance, From Dusk Till Dawn. The trio of films that were written by Quentin. This trifecta of screenplays were originally written to be his first feature length effort film (My Best Friend's Birthday not withstanding and subsequently buried in the mythology surrounding Tarantino) Killers, Romance and Dusk help to cement Tarantino's place in early 1990s film and pop culture.

Ian Nathan's book is a glossy sprint through the films and influences of Quentin Tarantino. Film being a visual language Nathan and Tarantino's words are complimented with a beautiful collection of photographs from the Kobal archives throughout the book. Myself being married to an academic something else I very much appreciated is the fact that the many Tarantino quotes are backed by four pages of sources.

With Once Upon A Time In Hollywood arriving on home video as I write this Ian Nathan's book on Quentin Tarantino is a great look back for those of us who have fond memories of discovering Reservoir Dogs on VHS and have been anticipating new Tarantino films ever since. Quentin Tarantino The Iconic Filmmaker And His Work is also a great companion piece for film lovers who have discovered the films of Tarantino in the subsequent years.

Posted by Robert Aaron Mitchell at 1:36 AM No comments: