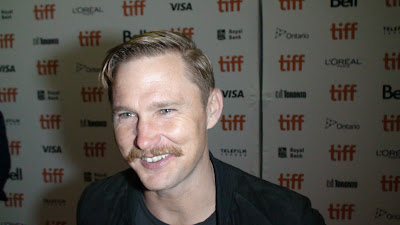 The Standoff at Sparrow Creek had it's world premiere at the Midnight Madness program at the 2018 Toronto International Film Festival. Robert Mitchell spoke with actors Brian Geraghty, Happy Anderson, Gene Jones about the Henry Dunham written and directed thriller which sees a neighborhood militia is shocked to discover that a recent mass shooting was apparently carried out by one of its own members. Here are the world premiere interviews and world premiere introduction and post-screening Q&A:

Posted by Robert Aaron Mitchell at 3:36 PM No comments: