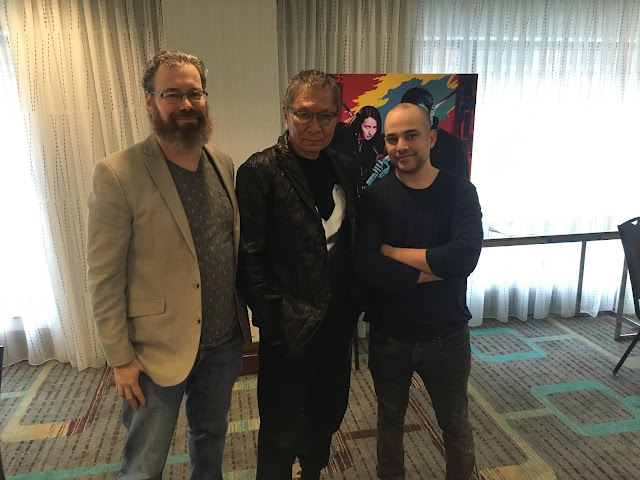 SHINOBI NO MONO (1962) ONE OF THE GREAT NINJA FILMS 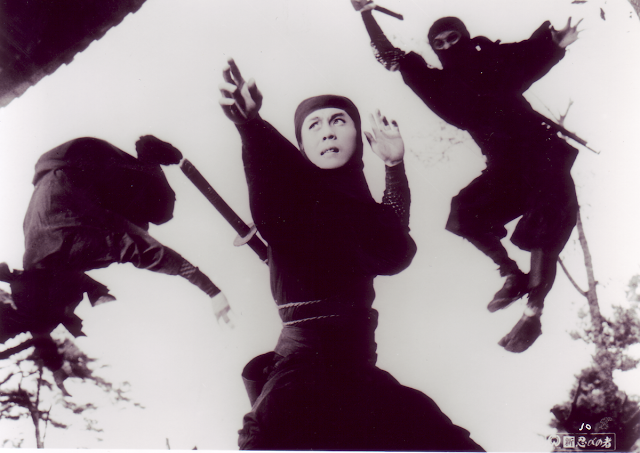 Before Sho Kosugi, before Michael Dudikoff donned Ninja hoods there was Raizo Ichikawa who was also known as the "Japanese James Dean". Raizo would act in over one hundred and fifty movies all for the Daiei motion picture company. In fact two years after Raizo's death in 1969 the Daiei studio would go bankrupt. Of all of his films it was the Shinobi series which would propel Raizo into super stardom.

Shinobi no Mono is set in the first year of the Tensho period (1573). The Tensho period would be marked by the the daimyo Oda Nobunaga the ruthless warlord whose burning ambition was to conquer all of Japan. Nobunaga was opposed by a coalition of other daiymo and Buddhist sects. It was in particular the Buddhist people that Oda was particularly fond of displaying his penchant for destruction. In 1571 (two years before Shinobi is set) Nobunaga destroyed a Tendai monastery and massacred all of the occupants of this holy ground. Historical context is needed to fully appreciate this film as it is very much rooted in history.

We begin the film by meeting Goemon (Raizo Ichikawa) a mid ranking ninja of the Momochi clan. He is a young man with endless ambition who one day wishes to assume the head of the clan. He and the other ninja are summoned to a meeting led by Momochi (Yunosuke Ito). During this meeting we learn the origins of ninja. The art of Ninjutsu was created by En-no-ozunu during the reign of Emperor Tenchi. Ninjutsu was then spread to various monks to extend and protect Buddhism. The very religion that Nobunaga is so bent on destroying. The Momochi clan has vowed to work for daimyo opposed to Nobunaga as mercenaries.

Along side this political context lies personal dynamics. Ninjas for all their special abilities are after all only human and it seems personal rivalries are amongst one of the many problems of a ninja clan. Goemon and fellow ninja Yohachi vie for top spot in the Momochi clan. The Momochi ninja clan and the Nagata ninja clan are rivals. Kizaru (Goemon's counterpart in the Nagata clan) vie against other ninjas for the honor of top ninja.  Goemon gives into his carnal needs and begins to have an affair with Momochi's wife Ino-ne who is very much neglected by Momochi. If this sounds very much like a soap opera it is because it is and takes up the first act of Shinobi.

A scene that really shines for me is when Ino-ne is fraught with paranoia that Momochi is watching her and Goemon. It is here we see the power of the ninja. Using deception, secrecy and stealth the ninja can confuse and get into the mind of an opponent. To give away anymore of the plot would be to ruin the film.

I must confess I have always been intrigued by Ninjas since I was a small boy so I will always have a soft spot for films featuring Ninjas. I recommend Shinobi no Mono to aficionados of ninjas but more importantly to Japanese cinephiles. Shinobi no Mono is a film very much steeped in Japanese history. The "action" scenes of the ninjas are very much a standout for me. We see the ninja use all the skills of their trade, shurikens, smoke, dexterity etc etc. One final note the cinematography of Takemura Yasukazu is absolutely exquisite.

Posted by Robert Aaron Mitchell at 11:15 AM No comments: 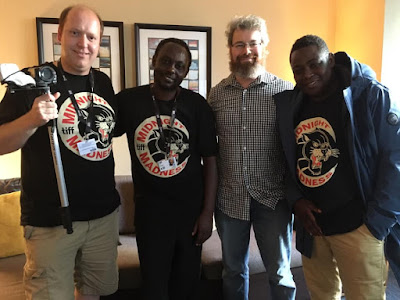 CRAZY WORLD was the closing film of the 2019 Midnight Madness at the Toronto International Film Festival it it blew the roof off of the Ryerson Theatre. That screening will go down as one of the most memorable and energetic screenings in the entire history of the program.

The film centers on children kung-fu masters who use their martial art skills to battle child kidnapping mobsters. Nabwana I.G.G. brings his Wakaliwood gonzo action that we first saw with Who Killed Captain Alex? and continued with Bad Black. The midnight screening was made even more special as V.J. Emmie provided live commentary as the film played. Here are my interviews with Nabwana I.G.G. VJ Emmie & Alan Hofmanis.

Here is an amazing moment when Midnight Madness called Wakaliwood!
Posted by Robert Aaron Mitchell at 10:20 AM No comments: 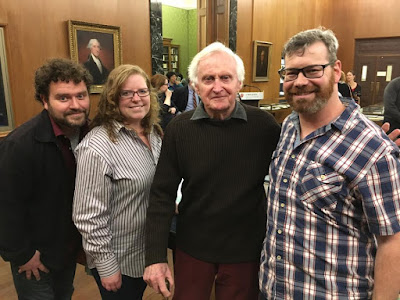 “In old age, words escape me. If I wait patiently, they float up, and I recapture them. If that fails, I am obligated to go down to the cellar, where they languish, and drag them back up. I note that water is starting into the cellar. I fear that some words will drown and be lost for ever. The quest for harmony of word and image has been my life. Sight loss is making the world look like Turners. While I still can, I hasten to testify.” John Boorman 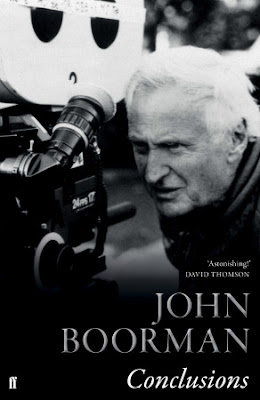 One begins to read a book on John Boorman to further gain insight into the thoughts of a unique filmmaker who directed films such as Zardoz, Point Blank, Excalibur, Deliverance. To this end the book will satisfy those looking for further insight and kernels of more film knowledge. Such as Lee Marvin agreed to make Point Blank on the condition that they throw out the existing script and start anew. As well as how it was David Lean who unknowingly saved Point Blank and Mr. Boorman's first American feature film from being stopped before production was set to begin.

The book begins with the heading TYPEWRITER and Mr. Boorman writes of his teacher and mentor John Maquire who encouraged the sixteen year old to pursue becoming a writer. John's mother then bought him a used typewriter. "where I sat every night tapping away with two fingers, a bottle of Tipp-Ex at hand" He would go on to have some success publishing some short stories. This yearning for story telling would soon find another way of expression and become the major driving pursuit of John Boorman's life.

In the opening pages we read about when John begin to make movies on Super 8 with his school friend Barry Vince."This was our fantasy. Film-making was a distant dream and occupied by people who went to Oxford." These pages took me back to my high school days and making films with my friend John Harvey and our VHS cameras. Running around our hometown as gangsters and suffering artists. Our movies were first inspired by John Woo, Martin Scorsese and Quentin Tarantino. As we continued our films became more personal and more art-house with our love for grindhouse still embedded in our short films.

A notable early passage where Mr. Boorman speaks about beginning to make the film The Emerald Forrest and living with indigenous people of the Xingu region of the Amazon rain forrest and how the tribe sees themselves as part of the greater whole rather than seperate beings and how our fixation on individuality can be alienating. As I reading through these particular pages I was thinking of the current moment of time we are all sharing amidst the spread of COVID-19. Of the need to collectively wear masks in public that do not necessarily protect us but to protect the other people we will come into contact with. Mr. Boorman takes this philosophy and applies it to making a film. "However clear your vision , you cannot make a movie on your own. You need a tribe. As a director you struggle to communicate to the cast and crew the essential nature of the film you are making. If things go well , there comes a magical moment when they 'get' what you are trying to achieve. From that moment, the film makes itself.' I was thinking of how the film-making process will be altered as time moves forward in the new era of the cornavirus Another exceptionally strong section for me personally was when Mr. Boorman takes us through his personal film school. Sections on writing, rehearsals with actors, another section on shot selection which will be a section I revisit often.

As I read Conclusions there were many times I had the feeling as though I was sitting by a fireplace in Wicklow Hills, Ireland across from Mr. Boorman as we spent an evening drinking scotch as I listened to his stories of film-making, life and friendships and family as well as his affinity for water and trees. As I was nearing the end of the book it really felt as though I was privy to a very private and intimate conversation with a person who is very much more than the films that brought me to this book. Mr. Boorman is clearly preparing for the end of a life lived. He has outlived many of his film-making contemporaries as well as losing friends and family. His words convey a sense of peace as well as preparing for death. He is still very much driven by imagination and curiosity of our shared existence and the planet we currently call home. As I read the last words of Conclusions there is a hint of regret in Mr. Boorman's words that so much of his time was spent in the pursuit of making films. Ultimately it is the life we have lived which is of utmost importance. Life is about the friends and family the precede us to the other side and the friends and family we leave behind. May our stories live well after us.
Posted by Robert Aaron Mitchell at 12:05 PM No comments: