WARREN OATES: "I DON'T KNOW WHERE HOME IS". My Visit To Depoy and Greenville Kentucky

“How often have I lain beneath rain on a strange roof, thinking of home.” ― William Faulkner

"Look at this face you sons of bitches, your going to remember this face!" - Warren Oates as John Dillinger.

I am in the midst of a life of wandering. Currently I live nowhere near where I was born and have sought to put as many miles away from there as humanly possible. The concept of home is one I think about often. I have stood in front of childhood homes of literary figures who have inspired me. Ernest Hemingway's Oak Park, Illinois home. Hunter S. Thompson childhood home in Louisville, Kentucky. I am fascinated where peoples lives begin. In the case of actor Warren Oates, he was born in small Kentucky town in the heart of coal country, Depoy.

One night years ago while re-watching one of my favorite films, Sam Peckinpah's "Bring Me The Head of Alfredo Garcia" I started researching Warren Oates and found out he was born in the small Kentucky town of Depoy. Not all that far from where I am living these days. Further research informed me that in nearby Greenville, Kentucky at the Duncan Museum and Art Gallery was a tribute to Muhlenberg County's most famous son dubbed the Warren Oates Memorial Hall. This information was buried somewhere in my brain caves. A couple of days prior to Independence Day this year I began looking for information about Warren's hometown. I saw that he was born on July 5th, 1928. How great would it be to be in his hometown on his birthday. Remembering that there was a tribute to him I began researching once again. My research informed me that the art gallery was donated in late 2013, the Duncan home was gifted to the Muhlenberg County Public Library by the City of Greenville and was now named Thistle Cottage. 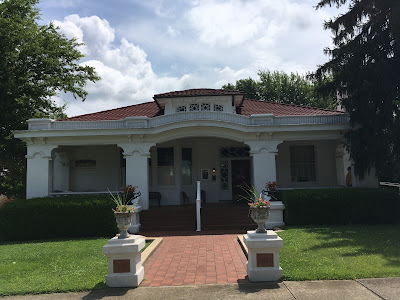 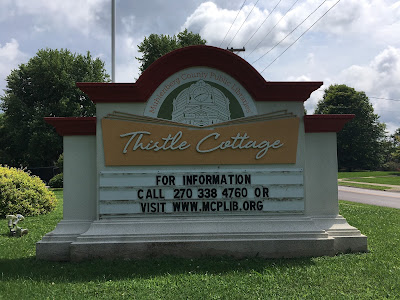 I also discovered that this space was currently undergoing renovations. I wondered if the tribute to Mr. Oates was still there. I found a contact and emailed. Amie an archivist for Thistle Cottage emailed back an hour later stating that the Warren Oates items were indeed still housed there, and confirming that renovations were on-going and that the items were not currently on display, however she would set them up for me if I were thinking of visiting. I responded if that was not too much trouble I would head down for a visit as I was trying to time it around his July 5th birthday. She said that it was no trouble at all.

My wife and I got up early and I began to drive down to Kentucky from our house in Southern Indiana. The drive down I-69 was good and the day was threatening thunder storms. When we arrived in Depoy, Kentucky it was still a beautiful sunny morning. As we got closer to Depoy we kept look out for a sign. We spotted the sign. I pulled the car over and Sarah took a picture for me. 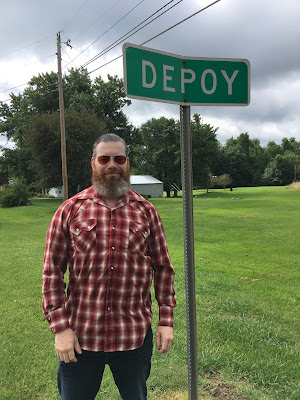 As expected there was not much to see. We got back in the car and arrived in Greenville an hour before Thistle Cottage opened. Walking around the town square we saw a beautiful marque for the the Palace Theater which was where a young Warren Oates would see films and perhaps where the yearning for cinema and acting began. 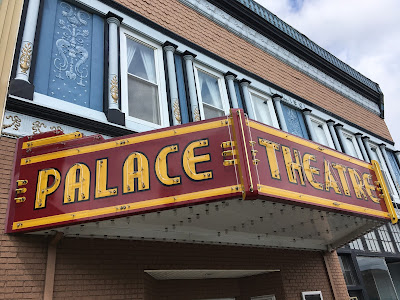 The marque stands in remarkable shape. The space is now the Muhlenberg Community Theater where plays are staged and other community events take place. We walked around the square which is centered around the old courthouse. There were several statues dedicated to history and a 911 memorial. We then drove over to Thistle Cottage. I opened the door and a woman approached us. "Amie?" "Yes." "I'm Robert Mitchell who emailed you about the Warren Oates items." We exchanged pleasantries and she showed us into the front room where all the items were on display. My eyes immediately were drawn to the large photo of Warren front and center. One can quickly put Mr. Oates into categories. "Character Actor." "Every man" 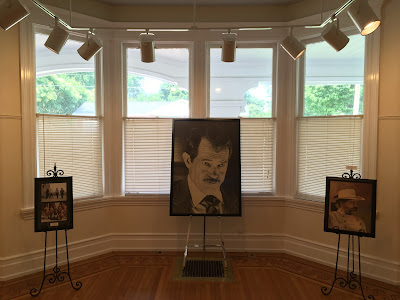 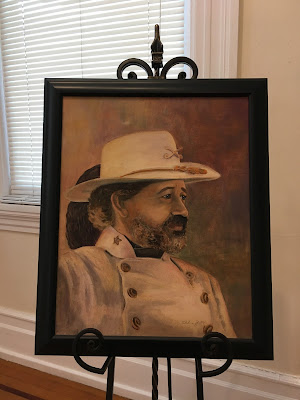 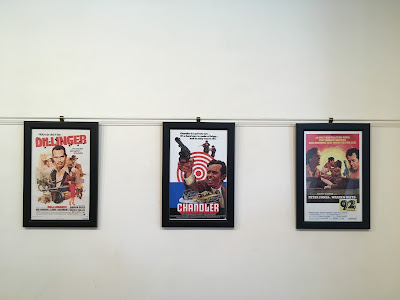 Many films Warren acted in were displayed in the space. According to iMDB he has 125 acting credits. There were many episodes of television before breaking into feature films.  For my money he is one of America's consummate actors. His energy and charisma were magnets drawing to a film viewer. The characters he inhabited were wounded and prone to rage. They also had dreams and heart.

That smile Mr. Oates flashes as GTO the first time we see him in Monte Hellman's Two-Lane Blacktop stays with long after the credits roll. Kent Jones would write of Oates performance as "heartbreakingly eloquent woundeness" and would further expound, "Warren Oates GTO is every pontificating drunk, every reformed junkie or born again proselytizer, every guy who moves to another town to begin again....Like all dreamers, he's just talking to himself." 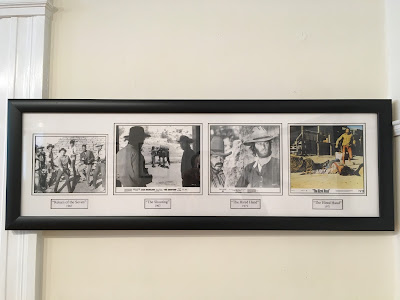 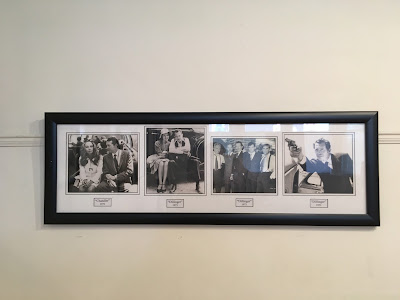 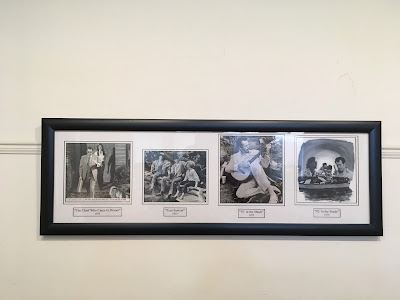 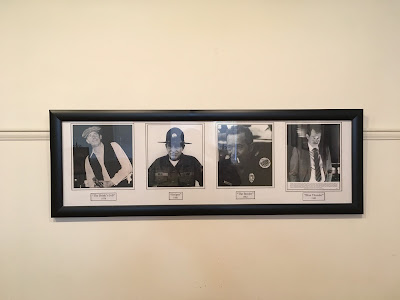 Then there is Oates' first leading role, Bennie from "Bring Me The Head Of Alfredo Garcia" a down and out bartender working in Mexico. A character it has been said was based on larger than life film director and frequent Oates collaborator Sam Peckinpah.

The highlights of the collection on display at Thistle Cottage were the couple of family photos and numerous local newspaper articles that Warren appeared in when he would come back to Muhlenberg County. Warren's father Bayless Oates owned a general store in Depoy. The family lost the store during the Great Depression. Bayless then took to the road doing odd jobs. Warren's mother Sarah took in boarders. One night they took in Jesse James and his partner just before they did a bank robbery in nearby Russelville. James and his partner left a ten dollar gold piece under a breakfast plate. The Oates family moved to Louisville, Kentucky when Warren was thirteen. He attended school was often made fun of for being a "hillbilly" who dressed funny. Ostracized he spent most of his time in trouble and getting into fist fights. By eighteen Warren decided to join the Marines, "I figured if I didn't, I'd end up in jail." He served for two years mostly as an aircraft mechanic. Back in Kentucky he attended Louisville State University. He took courses in business administration, anthropology and English.  It was during his time at Louisville State University that he developed an interest in acting after joining a student theater group. Warren dropped out of college and decided to New York City to pursue the life of an actor. He his Kentucky roots with almost nothing. His brother Gordon gave him two twenty dollar bills and said, "Don't spend this until you have to."Warren boarded a Greyhound bus for the big apple. He checked coats and washed dishes. All the while going to auditions. Warren began to get jobs in television. His career would span over two hundred television shows and forty-one feature films. 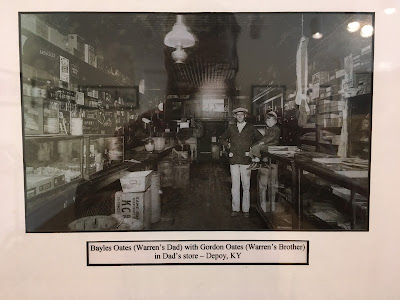 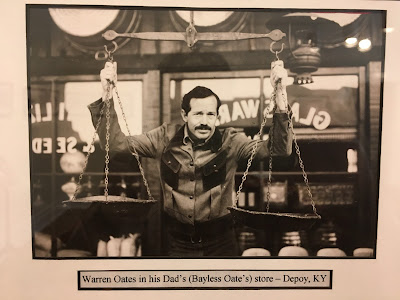 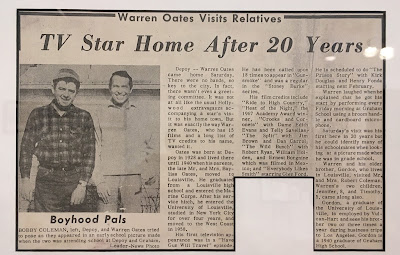 A large article about a documentary in the making about Warren that was created by two fellow Kentuckians, Tom Marksbury and Tom Thurman. That documentary would become Warren Oates: Across The Border. In this article I read a great story about Peckinpah and Oates both living as neighbors on ranches in Montana. Judy Jones Warren's wife was trying to keep him bad influences of Peckinpah and had facilitated a large, study gate to close off the driveway. Peckinpah was driving a pickup over to Oates' place and went hurtling through the gate at 75 miles per hour, sending the gate flying straight up towards the sky. Oates came running out to see what the commotion was and upon spotting his friend through his hat up in the air. The gate and hat land at the same moment. Witnesses said it was just like a scene in a Sam Peckinpah movie. Another newspaper article was about Oates returning to Kentucky, Lexington to be exact while he was filming the t.v. movie Black Beauty. 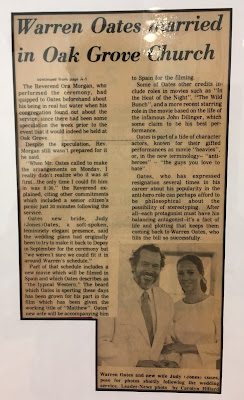 There pictures from the local paper of Warren getting married to Judy Jones. The wedding happened at the Oak Grove Missionary Baptist Church in Depoy in 1977. At this church in the 1930s Warren a scrappy, young kid would earn seventy five cents a day for firing up the stove and ringing the church bells. 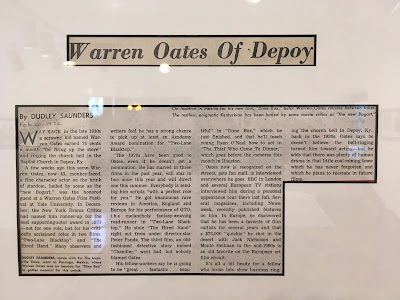 Another newspaper article by Dudley Saunders from February 20th, 1972, cited Oates speaking of this church and Depoy: He didn't believe the ringing of the church bells lead him to acting but he adds there was plenty of human drama in that little coal-mining town he has never forgotten and which he plans to recreate in future films.

The unpredictable and nomadic life of actor sometimes got on top of Warren. In one interview he spoke of hanging out and bars and counting to get into fights. "I'd pick up a bottle and clear the table with it." There was another night back in Hollywood he chased a guy up Santa Monica Boulevard "like a raving banshee wielding a knife." Warren's first marriage fell apart. He discovered he had hepatitis. He stopped drinking and started writing, mostly poetry. Another article Warren lamented being typed cast as the anti-hero in films. There are also a  couple newspaper cutouts of Warren Oates obituary.

I had no idea what I would see at Thistle Cottage. I enjoyed seeing the newspaper articles that had been saved from years gone by. I now know more about someone who I consider one of America's great actors. To be able to physically stand in the tiny town of Depoy and know that from this place is where Warren Oates began his life was remarkable for me. Talking to Aime before leaving she told me that she had no idea what she was going to set up in the front room of Thistle Cottage for the month and then she received my email inquiring about the Warren Oates items. She then thought that was perfect. As Sarah and I we left to head back home, I thought it was great that I had a small part in influencing the culture of a small Kentucky town and that for Warren's birth month the tribute to him was once again on display in Greenville.

Kentucky born Warren Oates found his calling for acting in the Bluegrass state and then hopped on a bus bound for New York City to pursue his passions and those dreams and ambitions took him to Hollywood. Once Warren was established in the craft of acting he also spent time in Montana. In a December 23rd, 1968 a Greenville newspaper article Oates was asked where home was, "Man, I just don't know." Warren replied.
Posted by Robert Aaron Mitchell at 11:47 AM No comments: