Hobo With A Shotgun Blasts the Sundance Film Festival 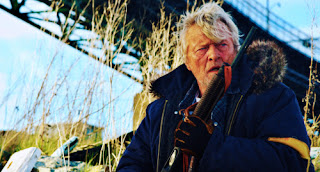 One of the films I have been tracking for quite some time is Canada's own Hobo With A Shotgun. It is quite a remarkable story. The initial trailer was made for the Robert Rodriguez' SXSW Grindhouse trailer competition.


Jason Esiener's trailer took first place. When Grindhouse played theatrically in Canada the Hobo With A Shotgun trailer was interspersed with the regular coming attractions. The trailer was so much fun and so true to the seventies exploitation trailers that it was not long before there was talk of a feature length version. At the 2008 Toronto After Dark Festival I caught up with director Jason Esiener and producer Rob Cotterill. We spoke about their short Treevenge that premiered as a part of the closing night festivities. We spoke about the possibilites of a Hobo feature, which at the time were in the very initial phases of going through the process of trying to find funding. Here is that 2008 interview:

Well the film was the opening selection of the Sundance Midnights programme and has been getting great reviews from a number of critics:

It has been quite fun to watch these guys and their passion for film take them from a trailer shot in Dartmouth, Nova Scotia to a feature length film starring Rutger Hauer. I send you guys huge congratulations and am glad the world is getting to see another side of Canadian cinema.
Posted by Robert Aaron Mitchell at 4:22 PM No comments: