31 DAYS OF HORROR, HALLOWEEN: The Films I've Watched Part One

I decided this year I would join in the fun and watch and write down some thoughts on horror films during the 31 Days of Halloween marathon in this fine month of October. Embarking upon such a venture one realizes how many horror films are worthy of a rewatch or a first time viewing. Here are the first ten films I watched. -- Robert A. Mitchell 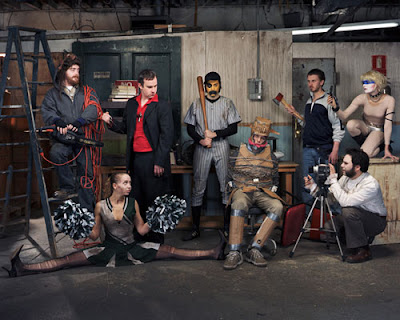 Having recently gotten back from the 2015 Midnight Madness program at the Toronto International film festival which had the North American premiere of Jeremy Saulnier's latest film Green Room I have had a hankering to rewatch his first film Murder Party for quite some time. A friend of mine Jay was recently in Bloomington for the last Diabolique film festival. He has an extensive collection of VHS tapes and maintains a horror blog called The Horror Section that was born out of his working at a video store many years ago. My current local of Southern Indiana has many independent video stores still running. One such is Video To Go in nearby Ellettsville. Long story short, I lost my copy quite some time ago. At our visit at this video store I found a DVD of Murder Party which I bought. Believing in kismet I began my 31 Days of Halloween with this film! 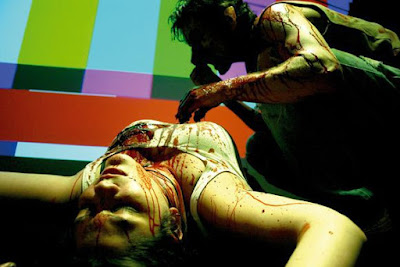 The second film I viewed was Jim Mickle's first film Mulberry Street. For me this film and Murder Party are linked, they are both films by first time feature film directors that I first watched at the Toronto After Dark film festival. Viewing this film several years later and having the knowledge of the of films Jim has crafted since, Mulberry is still such a strong first film. A film that was very much willed into existence and fighting it's limitations of time and budget. Initially watching Mulberry at After Dark and talking with Jim after the screening I had the forethought Jim was going to continue to be a talented filmmaker that would grow and he very much has. 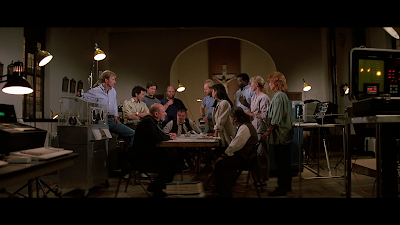 John Carpenter is my favorite filmmaker. I revisit his film many times and such is the case with Prince of Darkness. I love the atmospheric, slow burn that is this film. I also love films where people are all in the same environment under siege working together. There is something magical about watching a film where an ensemble cast can really play off of one another. As someone who really began his film watching in the mid-Eighties this era will always have a spot in my heart. As will practical effects of which Prince of Darkness features some great ones! 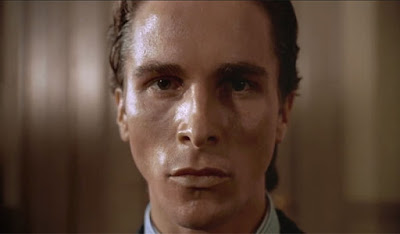 This has been on my mental list to rewatch for quite some time. My wife had never seen it. During the first scenes when Patrick (Christian Bale) is talking about his daily routine involving a face mask my wife thought that was a great idea and applied her own face mask. I thought this scene was extremely effective in both the novel and film as it is a way to draw us into the psychopath's mindset. As we remarked while watching the movie it does a really great job capturing the feel and look of an eighties movie. The film as is the Bret Easton Ellis novel is set in the 80s. The era of Reagan economics, large cellphones and larger cocaine habits. It is always strange to spend two hours in a world lead by such an unnerving, evil character. Bale turns in one of his best performances in his cinematic journey, which in no small part is because of director Mary Harron. In the scenes with Patrick and Detective Donald Kimball (Willem Dafoe) Mary asked Bale to portray his character three different ways. Firstly that the Detective knew Patrick killed Paul Allen. Second, The Detective did not know Patrick committed the murder and lastly Detective Kimball was unsure if Patrick Bateman committed the murder. 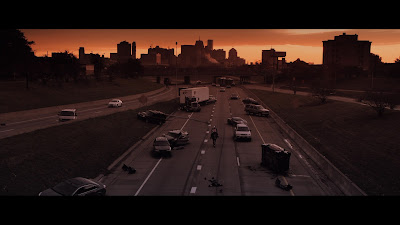 This rewatch came about from heading over to friend's house on a Sunday night for dinner and to watch a film afterwards. I did not want to take something over that was too steeped in violence and gore so choose this film. Once again a film that is very much atmospheric and involving people under siege from an unseen and unknown entity. Looking at the image I choose it reminds me of another favorite film Miracle Mile,  an Eighties film with people under siege this time from a nuclear war. Vanishing very much divided the Midnight Madness crowd where I first saw the film. For me I like the feel and vibe of Vanishing. A film such as this is predicated on the characters, since you are very much spending a lot of time with them. These are regular people with realized backstories now faced with extraordinary circumstances that I did not mind spending time with. 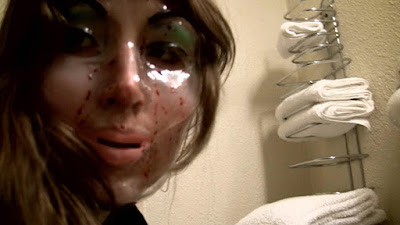 By this time I really wanted to watch some films I had not seen. V/H/S really made the festival rounds and has long been on my radar however I had not had the opportunity to see it yet. The film is a horror anthology directed by several people. As is the case with such endeavors some of the short films hit the mark and others miss it. The film is very ambitious and tries to shake up the anthology format. At times it feels like an experimental art film which is not a bad thing. However the overall movie felt long this is probably due to the fact that it is a film with a lot of voices involved. 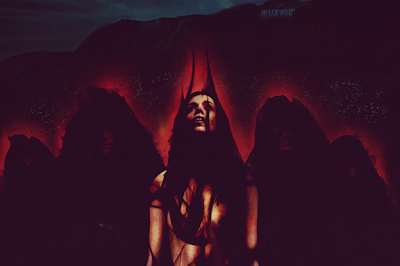 Another film that has been on my radar for quite some time that I was finally able to sit down and watch. For a movie that is very much rooted in the present era with smartphones, Instagram etc the film felt timeless. Alex Essoe the lead actress turns in a phenomenal performance, one that should really become a breakout role. The film is slow burn punctuated with very intense moments. There are many moments in this film that will not be easily forgotten. A very strong film that although it is far too early to say such a thing, I feel will be destined to be a horror classic. 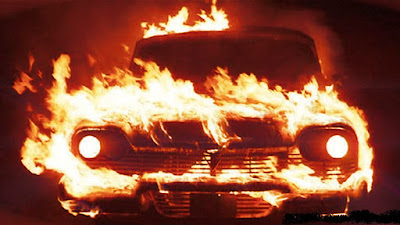 Once again a visit by a film by Mr. Carpenter. I think when one thinks on John Carpenter's filmography Christine is a film that is not always at the top of ones mind. However every time you sit down with the film you instantly recognize how fun the movie is right from the title sequence of the car on the assembly line with George Thorogood and The Destroyers song Bad To The Bone playing. Keith Gordon has phenomenal turn as his character transforms from nerdy guy into someone much more self assured but far more darker and dangerous. Speaking of transformations, the scenes involving the destruction and rebirth of Christine are absolutely amazing, they don't just hold up but look like they were created yesterday and very much makes one long for practical effects and stop-motion. 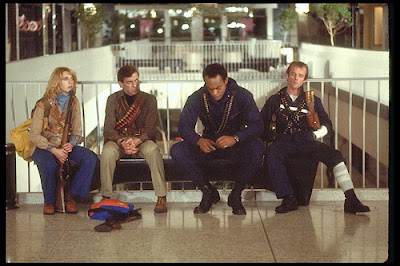 This was another film my wife had not seen and warranted a revisit from myself. Once again, upon reflection and writing about these films here is another group of people under siege and working together, however not from unseen circumstances but the walking dead. A film crafted by the master of the modern zombie Mr. Romero. It is interesting to watch this film in this era with the huge success of The Walking Dead franchise. Dawn was very much a subversive work commenting on consumerism, racism, the failure and breakdown of society.  Much has been said and written on this film. I will say this Dawn of the Dead is very much worthy of the term classic. A film which showed the horror genre can be much more than just scares, blood and gore although it has that a plenty! 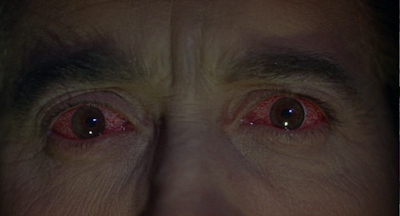 DRACULA HAS RISEN FROM THE GRAVE (1968) Directed By: Freddie Francis

How can one not watch a Hammer Film or twenty during a 31 Days of Halloween marathon? Watching a Hammer Film instantly takes me back to a random Saturday afternoon of my youth. These movies are very much a sensory experience and a wonderful visit with effects from cinema's past. Great lighting and painting on the very film print. The film is very much part of cinematic history as being the first film that received a rating from the MPAA.

Posted by Robert Aaron Mitchell at 12:06 PM No comments: 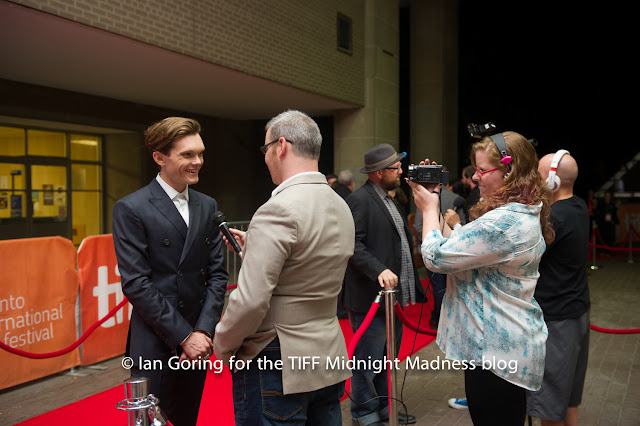 The Girl in the Photographs had it's world premiere on September 14th, 2015 at the Midnight Madness program at the Toronto International Film Festival. Robert A. Mitchell was on the red carpet and interviewed director/co-writer Nick Simon and some of the cast including Kal Penn, Claudia Lee, Luke Baines, Autumn Kendrick and Kenny Wormald. The film has the distinction to be Executive Produced by the late Wes Craven. The film was also shot by legendary cinematographer Dean Cundey. (John Carpenter's Halloween, Jurassic Park)

Posted by Robert Aaron Mitchell at 8:48 AM No comments: