Good morning, as I write this, in “normal” years I would be sitting in my second airport waiting room heading to Toronto. I spent many years living and surviving in this city.

My first tiff experience was way back in 2002. I was working nights in a grocery store in the Toronto neighborhood the annex. Tiff always falls on my birthday, which happens to be this year, tomorrow. My friend Alex who was the night cashier and a gregarious dude who chatted with everyone who was buying groceries in the middle of the night was talking to two guys who happened to work for the film festival. Alex knew I always wanted to attend the festival but had no idea how. In talking with the guys checking out they said they would come back with a couple of tickets for us. They did. That first movie I saw was a big red carpet world premiere movie of hometown film hero David Cronenberg’s Spider. I remember Gabriel Byrne walking on the stage in an extremely ill fitting suit and was wearing tennis shoes. The hypnotic, slow-moving maze like film and me working nights was a deadly combination. My first tiff movie and I fell asleep. Loudly.

In 2003 I bought a ten-ticket package and took the week off of work. It was intoxicating. This was also my first time seeing a midnight madness movie. The movie was Ong-Bak and it was an amazing tiff experience. That midnight screening was was life-changing on so many levels for me. That too is a long and great story, which much like Blanche DuBois was I being rewarded by, “the kindness of strangers.” You can read about that here. 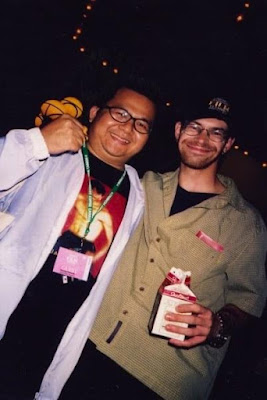 In 2004 I went crazy and bought a fifty-ticket package. That nearly killed me so that was a lesson learned. In 2007 my friend and I went and started shooting the Q&As and uploading them to the very new website, YouTube. The third film, George Romero’s Diary of the Dead we were accused of “pirating” the movie, even though the movie was not even playing. Suffice to say we did not get much footage that night. We did get enough of zombies on the red carpet and me complaining about the subway we turned into a music video featuring the Sprites song, George Romero. That video got seen a lot, very quickly.

The Sprites saw it and loved it and the then midnight madness programmer Colin Geddes also saw it and dug it and helped my friend and I get more footage as the week went on. This opened a lot of doors for us. That November we applied for and received our first media accreditation for the Toronto Reel Asian Film Festival and my first official interview was with actor Dustin Nguyen and his role in Finishing the Game. In 2008 we received our first midnight madness badge. I also started contributing to the Midnight Madness blog doing interviews and videos. 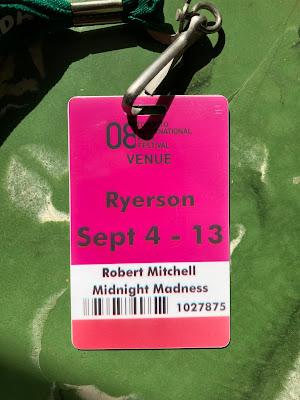 
In 2009 a brief introduction prior to the world premiere of Jennifer’s Body would change my life. My friend and long-time midnight madness attendee Bernadine introduced me to a woman by the name of Sarah who was living in Indiana and writing her dissertation about the film festival. Sarah and I would connect once again in 2011 and we started dating. The following year, we were married. She would also be the camera operator on many red carpet interviews. 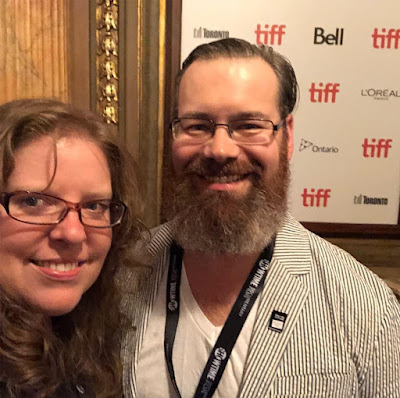 With Sarah at the Halloween red carpet (2018)


In 2008 and 2009 I was earnestly doing some red carpet interviews, by 2010 I was on every single one of them. In turn I became an unofficial video archivists of the programme. I had a ton of footage, from every introduction, post-screening Q&A, special events. The George Romero Canadian citizenship welcome ceremony in Dundas Square comes to mind as well as all of my interviews. Which as of right now have wound up over fifty different film releases from around the world. I have been subtitled in German, French, Spanish and Japanese. 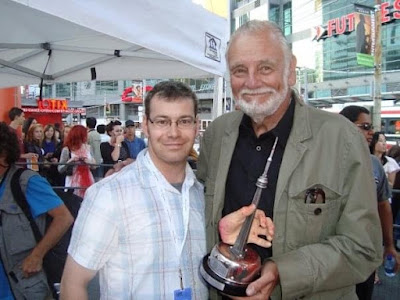 
Here we are two years into this world wide pandemic. This is the second year I will be “attending” tiff online. For this I am grateful and yet I am also missing the travel, the whirlwind nights, red carpets but most importantly I am missing all of my friends terribly.

I am embarking on this festival by just waking up and watching whatever I can with no previous research and seeing what world cinema is doing this year in the midst of another year dominated by Covid. I am ambitiously going to see as much as I can and write as much as I can because as long as I am typing it will alleviate some of the sadness of missing my friends and the crazy energy of the Toronto International Film Festival. Toronto in September is my favorite time to be in the city, not least of which is it’s also my birthday. This year, like last year, I'll be down here in South Texas watching as much cinema as humanly possible!

Have a great tiff,

Posted by Robert Aaron Mitchell at 9:10 AM No comments: