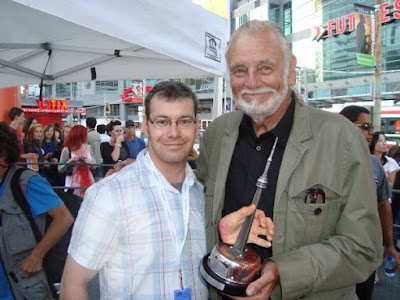 Robert Mitchell with George A. Romero at Mr. Romero's welcome ceremony as a Canadian citizen. September 12th, 2009. The inscription on the memento of the occasion was written by me and reads: "In recognition of the Canadian citizenship of George A. Romero , his status as a Torontonian and his efforts to bridge understanding between the living and undead through the cinematic arts September 12, 2009"

Toronto was Mr. Romero's home in his final years. It was in Toronto he would make his final films and they would also have there world premieres at the Toronto International Film Festival during Midnight Madness. Here is a collection of videos I made from the world premieres of Diary of the Dead, Survival of the Dead and the welcome ceremony in honor of Mr. Romero's Canadian citizenship.

Posted by Robert Aaron Mitchell at 5:54 PM No comments: