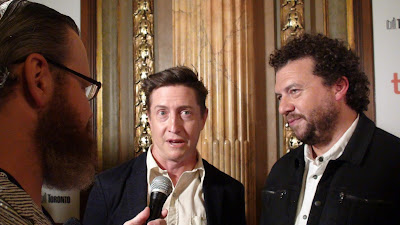 When the 2018 Toronto International Film Festival began who knew that it would be the 11th film in the long running Halloween franchise that would be one of the hottest tickets in town. The new film written by David Gordon Green and Danny McBride has Jamie Lee Curtis reprising her iconic character Laurie Strode. The film was approved by John Carpenter and sees him returning to score this new film with his son Cody Carpenter. I was on the world premiere red carpet here are my interviews from the Midnight Madness at TIFF premiere. There was a special guest prior to the film beginning. Seen the film? Watch the complete Midnight Madness post-screening Q&A to learn more about how the movie was made.
Posted by Robert Aaron Mitchell at 9:19 AM No comments: