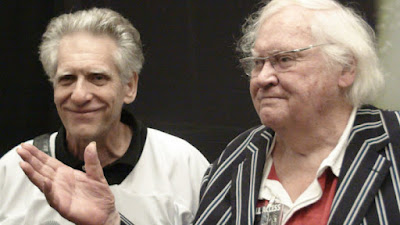 I have been a videographer capturing many film events from Toronto, Ontario to Austin, Texas for quite some time. Last August at Rue Morgue's Festival of Fear I had the great honor of recording the first time two great filmmakers met. David Cronenberg was the guest of honor at this convention and was speaking at a panel with Rue Morgue's Editor in Chief Dave Alexander when it was brought up that Cronenberg had always wanted to meet fellow filmmaker Ken Russell who was also in attendance. I walked up the aisle with Mr. Russell as he was wheeled up to present Mr. Cronenberg with a lifetime achievement award. Below is my footage, raw unedited, capturing a great moment of two master filmmakers meeting. This footage has taken on greater importance as Mr. Russell passed away on November 27th, 2011.

Posted by Robert Aaron Mitchell at 5:13 PM No comments: