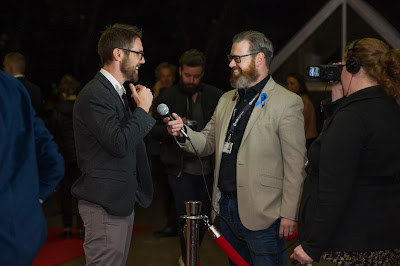 The Ritual based on the novel by Adam Nevill had it's world premiere at Midnight Madness 2017 at the Toronto International Film Festival. The film marks the feature film directing debut of David Bruckner (V/H/S, Southbound, The Signal. Robert Mitchell was on the red carpet and spoke with Mr. Bruckner as well as actors Arsher and Sam Troughton.

Posted by Robert Aaron Mitchell at 7:54 AM No comments: 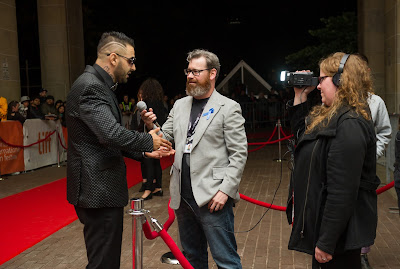 Dizaster speaking with Robert Mitchell at the world premiere of Bodied.

Bodied, the new film directed by Joseph Kahn and written by Alex Larsen aka Kid Twist was the opening movie of the 2017 Midnight Madness programme at the Toronto International Film Festival and it rocked the Ryerson Theatre. Robert Mitchell was on the red carpet and spoke with director Joseph Kahn, writer/actor Alex Larsen, Dizaster, Charlamagne Tha God, Calum Worthy and Rory Uphold.

Posted by Robert Aaron Mitchell at 8:14 AM No comments: