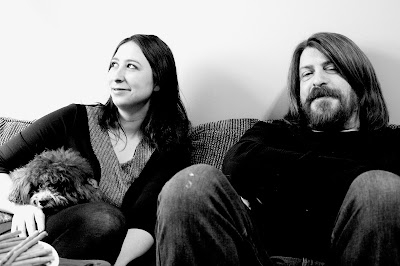 Memory Box is the third film directed and produced by the life and filmmaking partnership of Audrey Ewell and Aaron Aites. (Until The Light Takes Us, 99%: The Occupy Wall Street Collaborative Film). In April Aaron passed away after a battle with cancer.

“It was the most unbelievable privilege to share my life and work with Aaron for over 15 years. He never looked away from the darkness, but illuminated it so the rest of us could find our way a little more easily. Aaron’s passion for great and often obscure music, film, and art was contagious, and the world is a better place for his having been with us. Though he had much more to offer, he continues to shine a light in the darkness through his tremendous legacy of music, films, and the love he left behind.” -- Audrey Ewell.

I recently spoke with Audrey about her and Aaron's film Memory Box which recently premiered at Fantastic Fest in Austin, Texas.

Where did the idea for Memory Box come from?

I get a lot of ideas when I'm just about to fall asleep. Not ideas, really, more like images. I had this image of a woman smoking a cigarette outside of a factory. And then she's joined by a co-worker. And then of a man in his apartment, kitchen actually, at his computer. And from there I sort of imagined how they were linked, and I had this whole idea around this facility where actors would recreate memories or fantasies, and the sorts of weird interactions they might have with the customers. And what sort of rules there would be.

What themes did you want to explore in the film?

There's a lot in there around the way relationships are negotiated, and the difficulty in being honest, with yourself and with others. I also wanted to look at a relationship where traditional gender roles might be inverted, and how that might add difficulty. We're so inundated with cultural tropes, and they make it harder to be honest about what we want, as individuals. For both men and women. Especially when sex is involved, because it's so personal and there's shame and all these other weird identity things around sex that make it hard to be honest about. 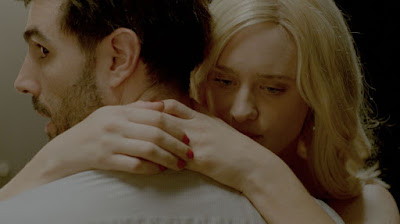 I really liked the visual atheistic of the film. How did you come to find the visual language of the piece?

We wanted it to have a slightly futuristic feeling, which we got with Eric Lin's impeccable cinematography and our locations and design, but then at the same time I wanted to reference traditional norms, so we did that a bit with our costuming. I didn't want it to feel "costumey" though, so we tried to keep it quite subtle. I gave our costume designer, Evren Catlin, reference images that were based on 70's Italian fashion.


Part of that, honestly, was just my own nod to director Michelangelo Antonioni. You can't make films like him anymore, they don't ever work when people try, and it wasn't our intention to try. But there are actually little nods all over the film like that, to directors who have influenced Aaron and me. Just as Isabelle is inundated by all these images of mediated female sexuality, we've also been influenced by the images and the films and media we've seen. So the film is literally peppered with references and nods to filmmakers we love. Which, probably, no one will pick up on, and that's 100% fine and expected. There was just this aspect of where we finally got to make a narrative - which we'd been wanting to do for years - so it felt right to pay subtle homage to the filmmakers who had fostered that love of film in us.


Memory Box was originally envisioned as a feature length narrative film. How difficult was it to tell this story in the even more concise structure of a short film?

The short came first, it was envisioned as a proof-of-concept for a feature that we hadn't written yet, and then we were working on the feature afterward. The idea was to introduce the world, concept, characters and conflict, and see if there was interest in making a feature that expanded on all of it. There was, but then life and death had other plans. 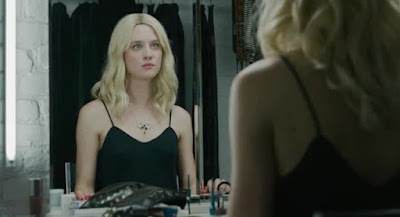 Making the documentaries Until The Light Takes Us and 99%: The Occupy Wall Street Collaborative Film how did those experiences prepare you to tell a narrative story?

I think having something like 500 movies in our library prepared us for that more than anything. But filmmaking in any form does teach you some of the nuts and bolts of how to work with cast/subjects and crew, etc. 99% was a crazy project where we were flying by the seat of our pants and trying to wrangle and stay on top of a project with 100 filmmakers all over the country, so that was just about putting in the hours, about 100 hours a week for almost a year. That film was about endurance. Until The Light Takes Us was a very crafted film, where we did really extensive research and went in with a 50 page treatment, and then made that film. So while it wasn't scripted, there was a story - really a theme - that we wanted to explore through juxtaposition of two timelines, and that was a very constructed film.

In this film you work with Mackenzie Davis, Louis Cancelmi and Shane Carruth what did they bring to this story?

Just: work with smart people. When you choose smart collaborators, every single one of them will bring something. They were all delightful to work with. Though it was interesting when we had a pair who didn't work in the same way, i.e. one might like to rehearse where the other doesn't. This was our first film as narrative directors, so it was a tremendous learning experience.

What do you wish audiences to take away from the film?

I hope they're intrigued by the world, characters and ideas. And I hope the end is interesting and maybe challenges their expectations a little bit. It's also a film that reveals more on repeat viewings, so I hope they'll like it enough to want to watch it 2 or 3 times. I've been told by a lot of people that they catch a lot more with each viewing.


But Since Aaron died, I do not intend to make this feature version any longer. I'm working on another film now, one that he felt really strongly about making, and one that isn't so emotionally impossible for me. So Memory Box stands as a testament to his enormous potential and talent, and to our partnership, which should have been allowed to go on. But wasn't. This film isn't about us as a couple, but every relationship is hard. Ours was as well. But we loved each other, and loved working together. And I'm not going to make that feature without him. So I just hope audiences appreciate it as a window into this world, that now exists, and which they can build on as much or as little as they choose.

Posted by Robert Aaron Mitchell at 11:08 AM No comments: 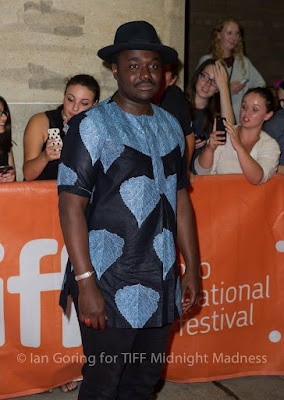 The 2016 Midnight Madness opening night film was the world premiere of Free Fire. The new film from Ben Wheatley. Robert was on the red carpet and spoke with actor Babou Ceesay about the film.

Posted by Robert Aaron Mitchell at 7:01 AM No comments: 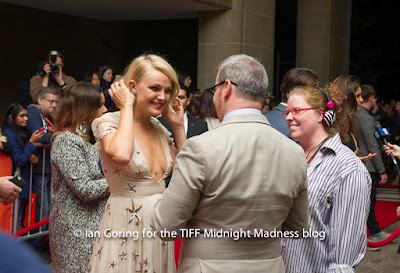 The closing film of Midnight Madness 2015 was the horror/comedy THE FINAL GIRLS. Robert spoke with Malin Ackerman, director Todd Strauss-Schulson and Taissa Farmiga about the film. Here is that video:

Posted by Robert Aaron Mitchell at 11:03 AM No comments: