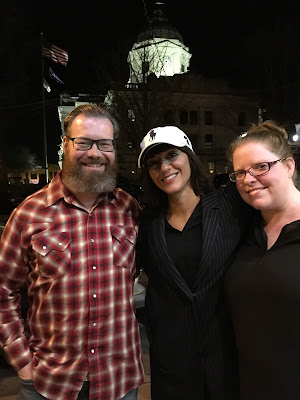 Ana Lily Amirpour arrived on the scene with her first film A Girl Walks Home Alone At Night and has followed that picture with The Bad Batch, a film that many are describing as post-apocalyptic but which Ana Lily says is a film that takes place now. It is also a film that has quite a cast, Jason Momoa, Keanu Reeves, a unrecognizable Jim Carrey, Diego Luna Yolonda Ross, Giovanni Ribisi, and introducing Suki Waterhouse. Sarah and I were at the The Bad Batch premiere at the 2016 Toronto International Film Festival and conducted these interviews on the red carpet. The Bad Batch opens June 23rd, 2017.

Posted by Robert Aaron Mitchell at 5:41 AM No comments: