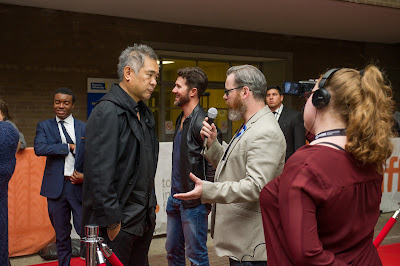 On Friday September 15th, 2017 the Ryerson Theater home of Midnight Madness at the Toronto Film Festival saw the return of writer & director Ryûhei Kitamura (Versus, Azumi) and his latest film Downrange. The theater was packed and rocking. Robert and Sarah Mitchell were on the red carpet to speak to Mr. Kitamura and the cast.

Posted by Robert Aaron Mitchell at 9:07 AM No comments: