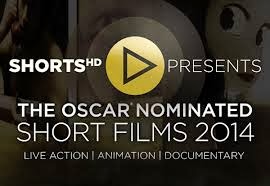 Last night I saw this years Academy Award Documentary Short Subject nominees. The films were as diverse as the human experience. Ranging from the story of the world's oldest holocaust survivor, to the documentation of protests in Yemen, an amazing story of forgiveness, to a cave digging artist in New Mexico and a World War II vet's dying days in prison. Suffice to say I shed my fair share of tears at these five remarkable and gut-wrenching films. I really have no idea how someone can vote on which film is better then another film. I would vote with my heart, however the problem I would face is that my heart was moved by all of these films.


The first film was The Lady In Number 6: Music Saved My Life. In this documentary directed by Malcom Clarke we meet Alice Herz Sommer who at 109 years old is the world's oldest living holocaust survivor. Listening to her remarkable stories and wisdom felt like listening to my grandmother. Her live is a testament to survival, life, positivity and the power of music which she describes as, "Music is dreams, music is God."


Karama Has No Walls screened next and tells the story of a peaceful protest in Change Square that took place during February 2011 in Yemen. The demonstration was peaceful and turned extremely violent when pro-government thugs arrived at the square. The footage in the film is culled from the cameras of Nasr Almamir age 17 and Khaled Rajeh aged 23. The footage is raw, gritty and on the ground. At one point there is blood on one of the videographers camera lenses. I have been a videographer for many years and have been at several protests, with that being said my experiences in protests with a camera pails in comparison to having people throw rocks, and having snipers shoot at you. I think anyone who is out in a violent public domain armed only with a camera is much more courageous than a solider protected in body armor and holding a machine gun. These young videographers need, determination in combination with their extreme bravery and great spirit to document the truth during these unfolding protests turning violent with little regard to the danger they are putting themselves into is true fearlessness. I am simply in awe of them.

Tim first met Matthew in an alleyway in Hollywood. Matthew who was a Nazi skinhead proceeded with thirteen other skinheads to brutally attack Tim based on the fact that he was gay. 25 years later they would have a chance meeting. Facing Fear is a phenomenal story of forgiveness and the ability of people to change.

CaveDigger directed Jeffery Karoff takes us to Northern New Mexico. In this film we meet the artist Ra Paulette. Ra does not write poetry or paint on canvas, his art involves heading out into the harsh terrain of New Mexico with a shovel, a trawl and a wheelbarrow. Ra digs into the earth and creates his own caves. I cannot describe how breathtaking his work is. For many years his cave digging has been commissioned art but as he comes to terms with the fact that he his aging and cannot continue this type of physical work for much longer Ra is trying to find and complete his magnum opus.

The last film of the night Prison Terminal: The Last days of Private Jack Hall tells the story of Mr. Hall who received three medals from WW II fighting for the U.S. As we meet Jack he is nearing the end of his life in an Iowa State prison. Many years earlier he was sentenced to life for murder. Jack is now 82 and is dying. This particular Iowa prison has a unique hospice program that sees fellow prisoners help care for their fellow inmates. One can be quick to judge someone's actions especially in the case of a murderer, watching this documentary does not make our natural instincts to rush to judgement very easy. Can people change? Does a convicted murderer have a right to die with dignity and care? This film affected me very much emotionally. Life consists of many layers and complexities. There are no easy truths. Our experiences consist of many colors and gray seems to be one that always floats in the middle. I am often wary of beliefs because to entrench ourselves and  chisel our thoughts so deep into metaphorical stone feels to me that we are relinquishing on the human spirit and giving up on how much any of us can transform in a lifetime.

I want to congratulate all of the documentary subjects and the filmmakers for bringing these truly moving stories of people to life.

Written By: Robert A. Mitchell
Posted by Robert Aaron Mitchell at 8:18 AM No comments: