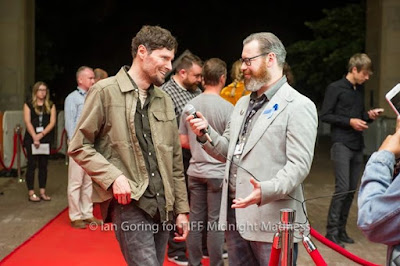 Robert Mitchell speaks with Director Seth A. Smith at the premiere of The Crescent

One of the great aspects of the Midnight Madness programme at the Toronto International Film Festival is the ability to showcase very independent films such as the art house horror film The Crescent. The story of the film is summed as, "After an unexpected death in the family, a mother and son struggle to find spiritual healing at a beachfront summer home." The film has exceptional visuals utilizing the art form known as paint marbling. The Crescent succeeds as it creates a slow, escalating dread as mother and son confront the dangers surrounding them. The son in the movie is the child of director Seth Smith and producer Nancy Urich who I spoke with at the world premiere as well as screenwriter Darcy Spidle, actors Danika Vandersteen, Terrance Murray, cinematographer Craig Buckley and production designer Paul Hammond.

Posted by Robert Aaron Mitchell at 8:28 AM No comments: