Upon learning of the tragic passing of Tony Scott I decided as a way of tribute to collect all of the trailers for the feature films he directed. 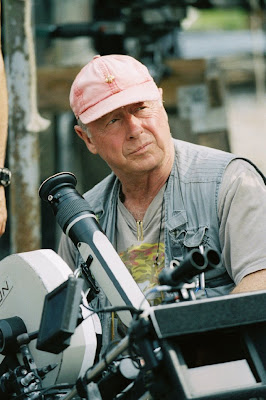 
Posted by Robert Aaron Mitchell at 2:51 PM No comments:

Into The Mouth of Madness

I am pleased to announce that I will be returning to the Midnight Madness program of The Toronto International. I'll be back on the red carpet talking to many creative and talented folks who worked hard to bring their films to life. This will be my eleventh year attending the festival and sixth year as a Midnight Madness blogger and I felt it would be cool to put together some of my favorite moments over the years at TIFF.

One of my favorite red carpets was in 2010 for the World Premiere of John Carpenter's The Ward. The great director was unable to attend but in talking to the cast the resulting video became a tribute to one of the great genre film makers.

One of my all time cherished memories of Midnight Madness was in 2009 writing an inscription for an award presented to George A. Romero celebrating his recent Canadian citizenship and subsequently meeting him after the ceremony. 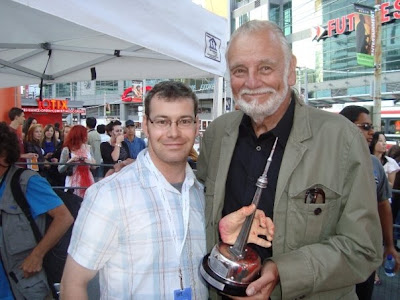 The inscription on the C.N. Tower being clutched by a zombie hand reads as such, "In recognition of the Canadian citzenship of George A. Romero, his status as a Torontonian and his efforts to bridge the understanding between the living and undead through the cinematic arts September 12, 2009." It still amazes me that words I wrote reside in the home of Mr. Romero.

Here is the video we shot of the ceremony in Yonge and Dundas square in downtown Toronto.


One of the things that make the Midnight Madness programme so special is watching the emergence of amazing talent emerge upon the world stage. There have been many, the amazing screening of Ong-Bak in 2003 immediatley comes to mind. As I have said before not many can lay claim to seeing the first screen appereance of Bruce Lee but myself and my fellow film goers sitting in the long gone but not forgotten UpTown cinema at Yonge and Bloor saw the emergence of Tony Jaa. Last year Midnight Madness attendees witnessed the makers of one of the best action films in a decade arrive on the scene of world cinema. Not many knew the names of Gareth Evans, Iko Uwais and Joe Taslim but I am sure many people will know who these very talented folks are ten years from now. Here is my video from the 2011 World Premiere of The Raid.

The 2012 edition of the Midnight Madness program at The Toronto International Film Festival is about to heat up. Here is a link to the ten films that will be rocking the Ryerson theater in September. LINK. There will be many more stories, great memories and cinematic thrills.

Here is a link to the home of the old Midnight Blog with my posts. LINK.

Here is the link to the current Midnight Madness at TIFF Blog which will be heating up for the 2012 program. LINK


Posted by Robert Aaron Mitchell at 9:19 AM No comments: