THE GIRL IN THE PHOTOGRAPHS: Director Nick Simon Interview [From The Archives 09/11/15] 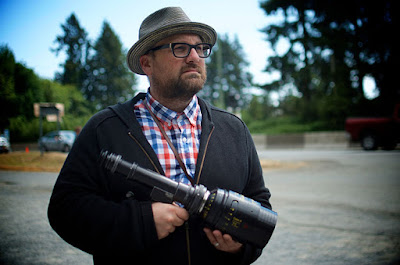 The Girl in the Photographs is set to have it's world premiere at the 2015 Midnight Madness program. The film was co-written and directed by Nick Simon. The film also has the amazing Dean Cundey (Jurassic Park, John Carpenter's Halloween) as it's cinematographer. The late Wes Craven was also an Executive Producer on the picture. I recently had the opportunity to speak with Mr. Simon about the movie. -- Robert A. Mitchell

You were born in Sioux Falls, South Dakota. What initially drew you to film making and how did you pursue this passion?
What drew me to film initially was just how big it all seemed. I was four years old when I saw Star Wars for the first time and that changed my life. It wasn’t until I saw the poster for Escape from New York that I became obsessed with film.  That film was my gateway into the genre. Growing up in the 80’s and being adverse in all things sports, the cinema quickly became my church.  My mother is a big fan of horror and true crime novels about serial killers.  That had a huge impact on me as well.  I purchased more than a few copies of Halloween and A Nightmare On Elm Street on VHS when I was a kid. The tapes kept wearing out.

Where did the idea for The Girl in the Photographs come from?
Oz Perkins and I started working on The Girl In The Photographs right after we completed my first film, Removal.  It was always sort of a hobby spec script that we kept going back to. We both went on to write other scripts while continuing to revisit Girl. The initial idea was to try and come up with a current story that had the same pace and feel as an 80’s horror film. It wasn’t until Wes Craven read the script and loved it when it became something I actively tried to get made.
The still I have seen for the film looks very haunting and ominous. What was the look you wanted to bring to the film?
Capturing the look and feel and tone of the picture was extremely important to me.  I really wanted this picture to feel like the films I loved growing up. I wanted to be very specific about where the camera was pointed at all times, yet still give the picture a moodier look while being beautiful at the same time. Hiring the right cinematographer was essential to the process.
You worked with legendary cinematographer Dean Cundey (Halloween, Jurassic Park) that must have been an incredible experience. What was it like to work with Mr. Cundey?
I’ve described working with Dean Cundey as a biblical experience. Every day in prep and on set was like a master class in cinema.  When I first approached Dean to shoot the picture, I remember saying to him, “I can hire a DP and show him all of your films, or you could shoot this picture!”  Luckily, he loved the script and understood what I was trying to achieve.  I hope to work with Dean again. He shot some of my favorite films of all time.
Wes Craven was an Executive Producer of the film. As you have said he was your mentor. Could you share something that Mr. Craven imparted on you about film making and life?
Wes was instrumental in getting this picture made. He was there every step of the way.  He had some ideas on a few script tweaks, he was involved in casting, every day he would watch dailies of our principle photography and gave me weekly notes on the edit. His notes during editing were always geared towards what the audience will see and learn in each scene.  He was very aware of how people watch horror films. Wes is a master filmmaker and having that kind of feedback was invaluable. He is one of the reasons that I am making film and his work has been such a huge influence on me. This film is for Wes. I’m happy that he wasn’t disappointed and loved the picture in the end.
What kind of cinematic experience awaits the audience of The Girl in the Photographs?
We all worked very hard to give the audience a throwback horror/thriller with modern story elements.  I’m hoping that the audience enjoys the film and they are able to laugh as well as be terrified. I hope they will see the influence and impact that the horror films of my youth had on me.

THE LORDS OF SALEM: Interview with Director Writer Rob Zombie [From The Archives 9/11/12] 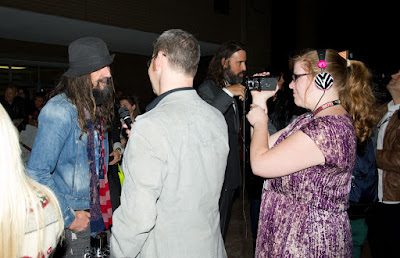 Rob Zombie talking with Robert Mitchell at The Lords of Salem premiere.

THE LORDS OF SALEM marks Rob Zombie's first time at the Midnight Madness programme at the Toronto International Film Festival. I don't think Mr. Zombie is given enough credit of how good a filmmaker he is. THE LORDS OF SALEM shows a filmmaker who definitely growing as a storyteller. I have always believed Zombie is a consummate visual stylist. Lords reaffirms this for me -- a film in which Zombie sits the camera down and sets up well composed shots influenced by Kubrick. His casting choices are always inspired and pay respect to the history of the horror genre. I recently had the opportunity to ask Mr. Zombie some questions.

Being born in Haverhill not far from Salem Massachusetts have the witch trails always a point of fascination? What was it about the witch trials that sparked your imagination and set in motion the writing of The Lords of Salem?

Growing up in Massachusetts I always thought the state had a cool spooky vibe and the reality of the witch trials certainly fed that vibe. The inspiration for the movie was an accident really. One day I just happened to buy a book on the witch trials in the gift shop of a hotel I was staying at. That book got me thinking about it and that was the beginning of the project.

You shot the film, then went on tour and then returned to edit the film as well as produce your next album. How did that gap between production and post help you approach what you shot as opposed to jumping right into an editing suite? What were some of the benefits of the challenge of balancing both projects?

In some ways it drove me crazy because I really just wanted to keep working on the film until it was done, but in other ways getting away from it helped me to solve problems that you can't solve sometimes just because you get too close and can't get any distance from the project. All in all this method worked out great.


The cast you and Monika Mikkelsen have assembled is a who's who of genre films. How do you approach casting? Do you write with certain actors in mind or seek out actors through more traditional methods, like auditions?

All of the above. For some roles I have a specific person in mind and for others I do typical auditions. Whatever it takes to find the right person for the role. One example of an audition that blew me away was Judy Geeson's read for the role of Lacy.


Watching your films and videos over the years I believe you are a consummate visual stylist. How did you approach the look of this film with cinematographer Brandon Trost?


We basically just talked about it over and over and over then decided on a course of action. I was always a big fan of handheld camera work, but suddenly it started to look like TV to me since so many TV shows use that style. So I wanted to do the exact opposite. Very steady camera work with all the camera moves being motivated by the action on screen. No shakey camera just for the fuck of it.

How has your approach to directing evolved from House of Thousand Corpses to The Lords of Salem?

Well, with each film you hopefully develop a better set of skills that you can apply to the next film. If you watch those two films back to back I don't think you would never think the same person made both films. Lords is a far more sophisticated production.

Be patient and pay attention. It is not what you think it is.