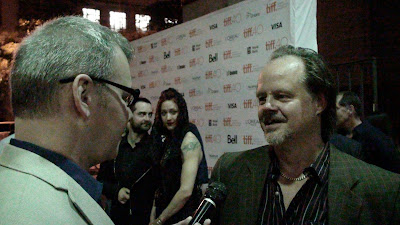 Larry Fessenden may not be a name you instantly recognize but the name is one that has probably been involved in some of your favorite films. At this year's Midnight Madness alone Mr. Fessenden's reach is felt, from Ron Perlman that has worked numerous times with Mr Fessenden, from The Last Winter which was written and directed by Larry as well as I Sell The Dead which Mr. Fessenden not only produced with his company Glass Eye Pix but also acted in. If you were looking really close during Brad Anderson's Vanishing on 7th St, there was Larry on the big screen again, which brings me to Stake Land. Stake Land was also produced by Glass Eye Pix. He has over forty acting credits, has produced 35 films and has numerous directing credits for feature films, shorts and documentaries. In short. Mr. Fessenden is not only a remarkable talent but is truly a tireless advocate for independent cinema.

As others are talking about recession and economic downturns you and Glass Eye Pix seems to be thriving in the film world, how do you equate your success in remaining in business and producing quality work?


We were very fortunate to have had financial support throughout the recession of Dark Sky Films. The association began with Ti West’s THE HOUSE OF THE DEVIL and that lead us to strike a deal to produce three more movies over the course of 18 months: BITTER FEAST, STAKE LAND and HYPOTHERMIA. And that was followed by another Ti West film, THE INNKEEPERS. So we’ve had a very good run of it with Dark Sky. In the 2000’s Glass Eye Pix invested in the careers of several filmmakers including Ti West, Graham Reznick, James McKenney, and Glenn McQuaid, as well as Kelly Reichardt and Ilya Chaiken, and the consistent model was to make films of artistic integrity at a very low budget. During more lucrative times we could get reimbursed for our efforts. It is our hope that in these lean years our model of frugality and originality will be attractive to new investors. It is important not to discount the sheer talent we have tapped in to. And I believe there is a tone throughout all the films from Glass Eye Pix that stands in marked contrast to the mainstream or even “indie” output and that is our brand.

How difficult was it to find the money to produce Stake Land? What challenges did you face that were unique to this film?


Stake Land was the most solid pitch we had for our slate of three movies with Dark Sky Films; it had the elements that looked good on paper: vampires, the post apocalyptic setting, and the director Jim Mickle had made a successful first film but still was hungry enough to go from no budget to low budget with gusto and conviction. So the film was financed easily, as part of an overall slate. The challenges were many from there. First, the script had to be reworked over several months to shape it into the feature it’s become, and then the epic scope of the story had to be fit into the budget. We determined to split the shoot into two parts, so we could experience on film the change in seasons. This was a gamble that paid off, but one that can stress a budget and crew and spook most financiers. As with all our films, we choose to emphasize post production: sound design, music, graphics, visual effects, the color correct and mix, all are an essential part of the experience we want to deliver, and again, the challenge is to strategize to get the most out of what is left of the budget after a grueling shoot. By using the same team of people in post-production on several films, we have been able to get a lot of bang for the buck.

What is something that you have learned as a producer that you wish you knew when you started out with your first feature Habit?


There is no one thing that has changed since I made HABIT in 1994. With HABIT, I established many of the principals that I still employ: A small crew (there were seven of us on HABIT), an open schedule (we shot over 45 days), and a long post-production emphasizing sound design and a rich, live score, all driven by a resourceful, single-minded auteur (which was me at the time). With HABIT, I endured a tsunami of festival and distribution rejections and so I released the film myself, compelling me to learn about marketing and exhibition. That experience taught me that there are no answers in show biz, there is only conviction. I have applied that to film after film with various degrees of success since, and it has helped several careers get started through Glass Eye Pix. Another thing I have learned since HABIT is I need my own producer to take care of the nuts and bolts of production. I may have a philosophical overview that drives the ship, but it was HABIT’s producer Dayton Taylor that got the film made, Jeff Levy-Hinte who got my subsequent films made, and now Peter Phok and Brent Kunkle have been instrumental in getting a slew of new pictures made. Collaboration in film at every level is essential. 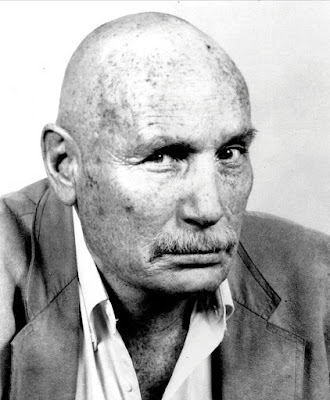 For my money Edward “Eddie” Bunker is one of the greatest American crime novelists ever. His art is one of the truest examples of the old adage, “write what you know”. His works of literature span five novels No Beast So Fierce (1973). James Ellroy had this to say about Bunker’s debut novel,  “The most gritty and realistic novel about armed robbery.” The Animal Factory (1977) Little Boy Blue (1981) Stark (2006) and Dog Eat Dog (1995) which is now a film Directed By Paul Schrader and Starring Nicholas Cage and Willem Dafoe and premiering at Midnight Madness this year. There is also a short story collection Death Row Breakout and Other Stories which was posthumously published in 2010. As well as an autobiography Mr. Blue: Memoirs of a Renegade (1999) issued in the United States as Education of a Felon (2000)

Well before Eddie Bunker was a writer he was a hardened criminal. He was a short con operator who specialized in cons “The Match”, “The Strap”, and “Laying The Note”. Bunker was a drug dealer and an armed robber.  He was once shot in a liquor store robbery attempt. He also dabbled in extortion and forgery. “Do the crime, do the time.” And Eddie served his. Eddie Bunker had the distinction in 1951 to be the youngest inmate of San Quentin prison. In one of Bunker's brief sojourns on “the outside” he befriended Louis Wallis who was the wife of Hal Wallis producer of Casablanca, The Maltese Falcon. It was during this four and a half year bid that Bunker would discover books and begin to write. While in San Quentin the prisoner in the cell beside him Caryl Chessman was sentenced to death row. Chessman had written a book entitled Cell 2455 Death Row about his experience awaiting execution and a first chapter excerpt appeared in Argosy, a pulp magazine. Eddie Bunker was doing a stretch in solitary confinement, "The Hole", where you were not allowed to read anything except the bible. Chessman gave the Argosy pulp to Bunker to read and it was here Eddie had an epiphany, “It blew my mind that a convict, much less one on death row (could write a book) and that night all of a sudden it just came to me, “If he can do it, why can’t I do it. I’m not facing the death penalty. I have all the time in the world.” Louis Wallis sent him a Royal portable typewriter and a subscription to the New York Times Sunday edition and Book Review. He sold his blood to pay for postage to submit his manuscripts to dozens of magazines and publishers. During a sentence in Folsom prison he would meet and befriend Danny Trejo. The two would become friends who would later act together in films. By the time Eddie Bunker's time was all said and done Eddie would spend eighteen years of his life incarcerated. Upon his release in 1975 he finally went straight and never looked back. He began to pursue writing and acting full time.

In 1978 the adapted screenplay of his novel No Beast So Fierce was released as Straight Time. The film directed by Ulu Grosband would star Dustin Hoffman in the lead role; the film would also mark Mr. Bunker’s first screen credit playing the character “Mickey”. Many years later a young director would study this film at Robert Redford’s Sundance Institute for Filmmakers. That director’s name, Quentin Tarantino. Tarantino would cast Eddie Bunker in the role “Mr. Blue” in Reservoir Dogs. 1980 would see Bunker playing the character “Chadwell” in Walter Hill’s The Long Riders It was in 1985 that Eddie would act in the film Runaway Train. Mr. Bunker was also one of the co-writers of the Runaway Train screenplay. The film would see three Oscar nominations. Best actor Jon Voight. Best actor in a supporting role, Eric Roberts and best film editing, Henry Richardson. Not bad for a Canon film that was produced by Menahem Golan and Yoram Globus.  All and all he would have close to thirty screen credits. Some of his notable appearances include parts in Running Man, Miracle Mile and Tango & Cash to name a few. It is said that Jon Voight’s character in Michael Mann’s Heat was modeled after Eddie.

The novels and screenplays of Mr. Bunker are raw, visceral experiences made even more poignant by the fact that he lived it. He confronts pain, rage, race and frustration exactly how you think he would. Head on. The arc of Edward Bunker’s life is a true testament of redemption and rehabilitation. Mr. Bunker would pass away on July 19, 2005 at the age of seventy-one from complications due to surgery. His books live on.
Posted by Robert Aaron Mitchell at 8:13 AM No comments: