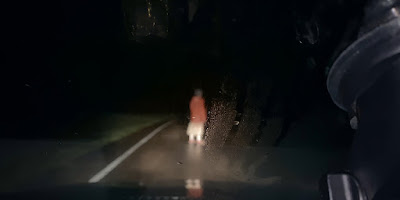 The main protagonist of Rob Savage’s Dashcam is an online presence known as Annie Hardy. This is not someone I would spend time looking for and watching online. That being said, Annie would for sure have a band of merry followers. Annie is loud, brash, anti-mask, anti-vax. One item she makes sure she packs prior to getting out of pandemic lockdown Los Angeles to crash at a former band mates flat in pandemic lockdown London, England is a, “Make America Great Again” red ball cap. It is because I would not want to live-stream a Annie Hardy personality and her belief system online that I was cringing at what is rightfully so, something completely on the nose of our modern times that I personally kept shifting in my chair. I suppose this is by design and is a grand experiment to have a protagonist in a horror film that is completely divisive and thus divide the empathy - or lack there of – for the danger that Annie will be in.
We the audience are participating in a live-stream called BANDCAR which is The internet’s #1 Live Improvised Music Show Broadcast from a Moving Vehicle. The key word here is improvised; according to Rob Savage the film was made in the middle of the pandemic lockdown, utilizing no script but a skeleton outline. I have to hand it to Annie, she sure does spit some freestyle while driving around empty pandemic streets. We spend a considerable amount of time with Annie in the first act of the film. It’ll be off-putting to some and delightful for others. Once Annie gets into some dubious job offer with a mysterious passenger does DASHCAM really start to ratchet up the intensity. There is a great unsettling moment of the passenger sitting in the backseat of the car just staring straight ahead. It is delightfully unsettlingly. For me this is when the film really starts going for it. The film really becomes a hard cold slap in the face from a good friend. There is a license plate in the movie that contains the letters WTF. By then you, yourself have been saying, “WTF” for quite sometime. At this point in cinema, handheld, shakycam footage I do not believe can be called a limitation of low-budget filmmaking. In the hands of a talented cast and crew it becomes a sight to behold. DASHCAM is Blair Witch Meets Twitch. I do have to give props to editor Brenna Rangott and Director Rob Savage. To be able to pull all this together and make it watchable and entertaining is no small feat. The film also utilizes some great locations that provide some great visual aesthetics. Watching this movie all the way down on a cattle ranch in South Texas made me long for the ability to see this in a crowded movie theater in Toronto. There were definitely many moments to react to. The crazy starts, it just keeps going up and up. Delightful. I will also say this, DASHCAM’s end movie credits…WOW…better step up your game MCU.
Posted by Robert Aaron Mitchell at 3:17 PM