TIFF 2021 YOU ARE NOT MY MOTHER: Reflections by Robert Aaron Mitchell 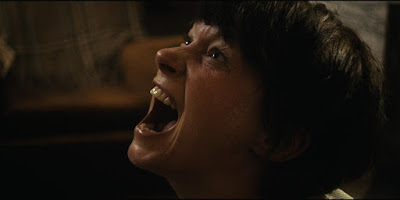 The film opens with a baby stroller abandoned at the end of a dead-end street. An out of focus woman limps towards the stroller and begins pushing it. The old woman is now with the baby in the middle of the woods. A spell book is seen. The woman begins a fire. A ring of fire surrounds the baby. The baby wails. The fire gets higher. Embers fly off into the night sky. So begins writer/director Kate Dolan’s You Are Not My Mother.

It is now years later. The film opens days before Samhain (Halloween). We meet Char (Hazel Doupe) a teenager who is an exceptional student who also deals with being an outcast. She is late for school and asks her Grandmother (Ingrid Craigie) for a drive. Gran cannot because of her bad foot. Char is instructed to ask her mother Angela (Carolyn Bracken). Gently opening the door to a darkened room, Char’s mom is barely awake. She agrees to drive Char to school. Char simple asks her mom to pick up some items from the store such as bread and milk. As the drive continues, things to not go well and Char has to grab the steering wheel to narrowly avoid an accident. Angela ominously says, “I can’t do this anymore.” Char makes it to school and upon retuning home finds the family car abandoned. The groceries she asked her mom to pick up are sitting in the passenger seat now several hours later. Angela has gone missing. Char takes a favorite photo of her and her mom to wander through the neighborhood to try and locate Angela.

Char’s family home and in particular her mother Angela is one that the rest of the neighborhood avoids and whispers about. Strange bad omens envelop this house. Kids are forbidden to hangout with Char. It also seems everyone knows or believes that they know what happens inside. Char carries the weight of being an outcast everywhere she goes. To further this she has a recognizable scar. Even when she leaves home to look for her mother holding the treasured photo of the two of them together danger waits in a back alley when a bunch of her classmates loiter around and spot Char. They encircle and confront her. Taking the treasured photo as hostage as they lay a stupid teenage demand upon Char in order to have the photograph returned.

A scene I was particularly drawn to was a family dinner. Char, Angela, Gran and Char’s Uncle Aaron sit around the table. Moments earlier Angela was doing well. In a grand mood, as she prepares dinner and dancing. Gran comes into the kitchen and knocks over the prepared food, thus sabotaging dinner. The Uncle not expecting a prepared meal has brought home take out. As the four family members sit around the table the weight of this family takes hold. The silences become heavier. What is said is challenged. The looks between Grandmother and mother ratchet up the tension. We the silent audience begins to make many assumptions. Throughout the story both Gran and mom both display instances of protecting Char and scaring her.

You Are Not Mother is very much steeped in Irish folklore. The film is anchored by the performances of Carolyn Bracken, Hazel Doupe and Ingrid Craigie. Kate Dolan guides this story with a steady directorial hand with empathy and understanding of Char’s predicament to be caught in the middle of her grandmother and mother as family history plays out or perhaps something more sinister that has happened many years before. Sometimes the horror of growing up is not knowing your place in the world and not trusting those that are entrusted to ensure your well being.

Posted by Robert Aaron Mitchell at 11:28 AM