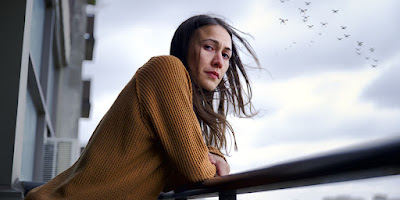 In Saskatchewan-born Cree-Métis writer/director, Danis Goulet’s feature film debut Night Raiders the year is 2043. The resonance of this story could reflect 1883 or 1943 or 1997. In the aftermath of a North American civil war people have suffered greatly, food is scarce and opportunities are few. The film opens with Niska (Elle-Máijá Tailfeathers) who is a Cree mother trying to navigate this stark and dangerous world and protect her daughter Waseese (Brooklyn Letexier-Hart). They forge for food while trying to stay out of view of the omnipresent drones. Waseese encounters a bird and calls to it. After several attempts the bird responds to Waseese’s call. She then gets caught in a man-made trap and a drone appears from the gray, chilly sky. Niska and Waseese return to their current place of residence, an old school bus. Niska destroys the dwelling as they try to cover their tracks from the ever-present surveillance state.

Even with the world in ruins the powers that be do everything possible to exert maximum control. Danger is everywhere. Children are property of the state. People are not naturally citizens of the state. That must be “earned” by sending a child to the Academy. As Niska and Waseese make their way through the ruins of the nearest city, large, loudspeakers are everywhere proclaiming, “The academy keeps your children safe”, “Every child deserves a brighter future”. The academy is a sprawling state system that is brainwashing children to turn them into soldiers for the state. As I watch and write this I am currently sitting in my wife’s civics classroom in a small town in South Texas where the politics of the day is a battle between teaching “critical race theory”, referencing the “1619 project” and the state trying to impose the “1836 project”. Who controls the textbooks, controls the history and the narrative, which ultimately controls the common knowledge of events which influences how people treat one another. History is powerful. Both freeing and controlling, depending what is being taught. To truly find justice for the horrors of colonialism, the kidnapping and killing of Indigenous children, broken treaties, stolen land and genocide the truth must be sought out and taught.

Elle-Máijá Tailfeathers and Brooklyn Letexier-Hart deliver powerhouse performances as they navigate this world. We see the strength, determination and the emotional toll of daily survival avoiding viruses, a state that wants to control and kill you. The world of 2043 is fully realized. There are elements that are both recognizable and pieces of a future that are realistically not that far away.

There are films that arrive a precise moment of time. Night Raiders was years in the making and the result of several generations preceding it. In October, 2018, Goulet emailed Taika Watiti. "I've known Taika for about 15 years: at Sundance where we both had our films, through my work at Imaginative where Taika has been many times, and then meeting on the festival circuit as we do year after year. There's a tight-knit global community of Indigenous filmmakers who have all grown up together. I sent him the script and asked if he wanted to be involved. He said, he'd do whatever he could. And then Ainslee Gardner and Georgina Condor, who he'd also worked with, came on as the New Zealand producers and that was when Chelsea came on as the New Zealand on-set producer representing their company." Night Raiders became the first Canadian/ New Zealand Indigenous co-production.

The amount of work and imagination that Goulet has put into this also show how prescient this story is. The Meekaw Virus first occurs in the Night Raiders timeline in the year 2042. Principal photography for the film took place in October through early November, 2020 and predated the first mention of COVID-19 by a month. This is both a story of a hundred years ago, our own present and if white people do not actually embrace reconciliation and justice for what our forefathers have sown, this story will continue in the year 2043. The state of cinema in recent years has sparks of light bursting through. Here in 2021 although the events of the modern day are frightening and isolating, we are also living in an exciting time of seeing new voices smash through glass ceilings and long controlled systems of who helms a film and what stories are elevated. Cinema at it’s finest is inspiring and brings us together. Congratulations to Danis Goulet and her entire team for making a dystopian film that illuminates, scares us, and gives us hope.

Posted by Robert Aaron Mitchell at 8:54 AM