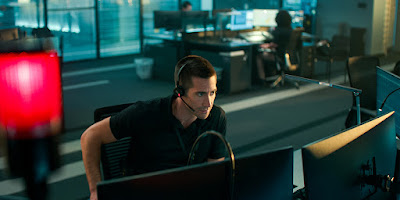 Antoine Fuqua’s The Guilty is opening soon in limited release and then will be available on Netflix US on Oct. 1. Normally I’d wait to watch the movie until then. At festivals, I like to see movies I am not sure I’ll ever have another chance to see. But Jake Gyllenhaal is why I watched it now.. Gyllenhaal plays Joe,  a police officer put on duty in the LAPD communications center answering 911 while an “officer-involved shooting” is investigated. Joe being the involved officer who shot a 19-year-old kid. Joe very much resents this work and wants to get back to helping and “protecting” people who he thinks deserve it and, though he doesn’t explicitly state it, punishing people he thinks deserve it. Then he takes a call from a woman who pretends she is speaking to her child. She’s been abducted. Joe continues to alternately express a rage he can barely contain and withdraw from the other officers at the center, as he works to discover where the woman is and who has taken her so he can save her life.

The Guilty is a remake of a 2018 Academy Award-nominated Danish film, Den skyldige / The Guilty, directed Gustav Möller. I haven’t seen Möller’s film and I am curious how closely  the screenplay by Nic Pizzolatto (True Detective) tracks with the original--especially with the ending.  The Guilty is a solidly made film because Antoine Fuqua knows what he’s doing. And Gyllenhaal is adding to his array of roles playing people who are terrible one way or another. Gyllenhaall is fantastic as he sits in a call center mostly reacting to audio. He was fantastic at making me cry at one point in the film, even though his character is an awful, punitive, rage-filled police officer.  Gyllenhaal is an affecting and effective actor, but is this the story I want to see re-set in an American context right now? Is this whose feelings I want to see explored right now? I don’t think we should not have stories about rage-filled LAPD cops realizing the horror of what they have done when they thought they were doing the right thing. But I also don’t know how much I want to see their feelings right now. Then again, this is Pizzolatto’s wheelhouse and I should have expected what I was getting into when the film started. Fuqua surrounds Joe with police officers of color who respond rightfully to him like he’s out of control and isolating himself, which helps. But still, I wonder how differently this story ends in the original film and how differently it comes across in a Danish context. All of this is to say: The Guilty is a solid, well-acted film and maybe make sure you are in a place to explore the psychology of a messed up police officer if you watch it.

Posted by Robert Aaron Mitchell at 9:10 AM