TIFF 2021 VENGEANCE IS MINE, ALL OTHERS PAY CASH by Carol Borden 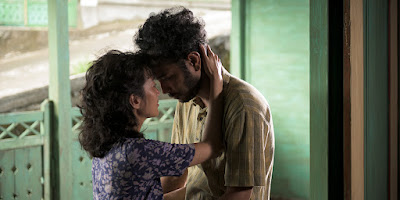 Hey everyone! I am so happy that Carol Borden, editor and one of the writers (The Cultural Gutter) is joining me on this the 2021 Toronto International Film Journey this year. We were able to work together in the days of the TIFF Midnight Madness blog. Without further ado her first piece of the festival! - Robert Mitchell

I’m pretty excited to be back on the TIFF beat and to be unleashed here at Soldier of Cinema after years of writing for and editing the official Midnight Madness and much missed Vanguard program blogs. I loved that job and loved those film programs. But at Soldier of Cinema I’m writing about films from a variety of TIFF programs so thanks, Rob, for this opportunity! - Carol Borden

The first film of the festival for me this year was, Vengeance Is Mine, All Others Pay Cash (Indonesia, 2021) directed by Edwin and adapted from an eponymous novel that is available in English if you don’t read Indonesian. Director Edwin co-wrote the screenplay with author Eka Kurniawan. Part of the reason I mention this is not just to help promote Indonesian literature, but because the film has a unique feel. I think some people might walk into Vengeance Is Mine, All Others Pay Cash expecting something different than they are getting with the film. You might be prepared for an exploitation film or b-movie fights and gore. And you do get fights, gore and sex. But behind all the fighting and humor is painful history and a look at toxic masculinity. As Edwin says in his introduction to the digital screening of the film, Vengeance Is Mine, All Others Pay Cash is grounded in Hong Kong cinema and b-movies popular in Indonesia in the 1980s, but it’s not a nostalgic movie and it’s not a movie that is neutral about its violence or uses rape as an opportunity for the viewer to see breasts while a female character retains her virtue. No, the violence is effective but the characters’ motivations for engaging in violence range from understandable but likely a mistake to idiotic to wrathful to cold-blooded and calculating disappearance of other people. Even the most understandable killing in the film doesn’t really heal anything. It’s the telling of stories--the telling of the truth of what happened--that helps the most making Vengeance Is Mine, All Others Pay Cash a potentially a better double feature with The Act of Killing (2012), a documentary in which Indonesian men who participated in mass killings in 1965-66, than with, say, The Raid (2011) or the more recent Geran / Silat Fighters: The Deed of Death (2019). 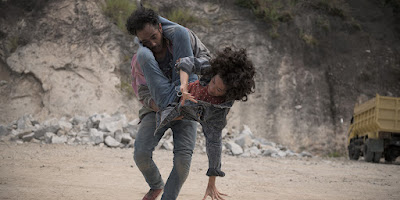 After Edwin’s introduction I couldn’t help but watch for the tell-tale signs of nostalgia. After all the film is set in the 1980s and into the early 1990s. The fashions and music are accurate. But there is always the background of what was happening in Indonesia at the time. And even if you don’t know about Suharto’s dictatorship, the “dark days” that Edwin hopes won’t come again as he says in his introduction, I don’t think you can help notice the general feel of anxiety about the military, about the police, about the men’s rage, about why this violence is happening and what has happened to everyone in the film. 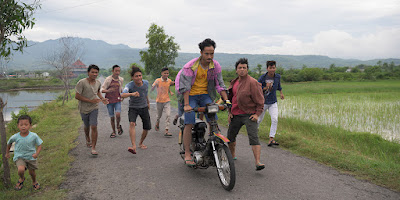 Anyway, I should provide a synopsis. In Vengeance Is Mine, All Others Pay Cash, Marthino Lio plays Ajo, a guy who can’t maintain an erection and, as an ad informs us, “Only a man who can’t get it up can face death without fear.” Ajo likes fighting. It’s all he wants to do. Until he gets into a fight with Itueng (Ladya Cheryl) when she’s paid to be a bodyguard to a sleaze construction company owner. After their tussle, Itueng quits and goes on to work in a carnival, which can only be described as rad. Ajo and Itueng fall in love, but there is a rival (Reza Rahadian) and there is Uncle Gembul (Piet Pagau), who prefers not to have his past as a general mentioned and who wants to hire Ajo to erase a man named Macan as if Macan burned up in Krakatoa. And for Ajo love seems impossible when he can’t get it up.

I have to say I enjoyed the phallic imagery--the spitting clams, the leeches. It was very entertaining.

Oh, yeah, and martial arts master Cecep Arif Rahman has a small role, but he does some nice fighting in it.

Posted by Robert Aaron Mitchell at 11:57 AM