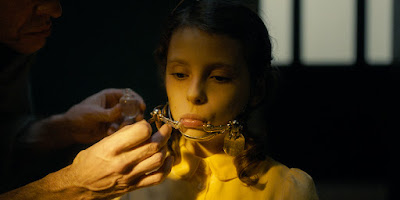 I just watched the newest film from Lucile Hadžihalilovać, Earwig. The film is based of a novel, of the same name by Brian Catling. Lucile in her video introduction of the film informs us that the idea of the novel came to Brian in a dream, “where a young woman offered him her teeth.” An image that does not show up the novel nor the film. However it is teeth that will indeed make the copy of any writing on this film.

A young girl has ice cubes for teeth. She has a caretaker by the name of Albert (Paul Hilton) who several times a day fashions her new ice dentures. She eats. He sits across the table and silently observes. The clicking and chiming off a clock break up the silence. The girl has much time on her hands and plays with a self-created foil animal. More unsettlingly, a rotary telephone seeps into the quiet. Albert answers. A mysterious voice asks about the condition of the girl. Albert responds, “Everything is well.” We are left with the feeling that everything is not well. 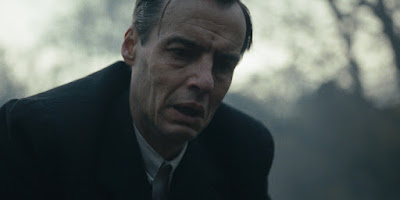 The film takes place in a gothic and timeless world. The film moves as though it was a dream. The palate is drab. The color orange permeates the film. The psychology of the color orange lends itself to feelings of excitement, enthusiasm and warmth. Orange is the only color in a painting of a large mansion the girl fixates on. The sky above the mansion is orange. The color glows from the main doorway. It illuminates a light near the rotary phone a link to another world. Orange as a promise of escape. 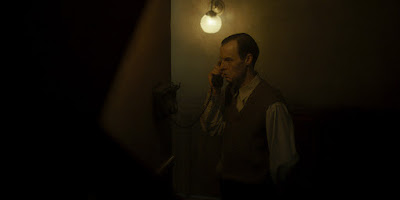 With the arrival of another phone call and then a red winter coat for the girl comes with the prospect that she will be leaving this caretaker and apartment soon. They exit the apartment and head to large iron-rot gates. Albert opens the gate and they go for a walk where empty drab streets lead to a scenic wooded area and a small lake. The girl free for the first time runs. Albert calls after her. He gives chase. The girl approaches the still water and leans down. She catches a glimpse of herself for the first time ever. She falls in. Albert panics and arrives on the scene. He pulls her out. It looks as though the girl has drowned. Anxious time passes. She stirs. A woman on a bridge looks on. (Romola Garai)

Once the girl has seen her first glimpses of a larger world she then dons her red coat and tries to spur Albert into taking her out again. He refuses. She is energized and insistent. She falls asleep at the foot of the door to the outside world.

Albert leaves his duties for the day and heads to a local pub. Imbibing in spirits a stranger approaches. Words are exchanged and this leads to an irreversible moment of great and sudden violence.

The girl is on her own for the first time and tries to fashion her own teeth. She wanders in empty and quiet rooms. Albert eventually returns. The plans for the girl to leave continue. 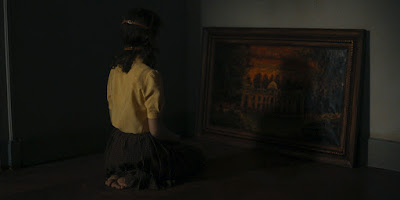 Lucile said prior to the film, “I’d like you to be hypnotized by the film.” Towards that end, she succeeds.

Posted by Robert Aaron Mitchell at 6:38 AM