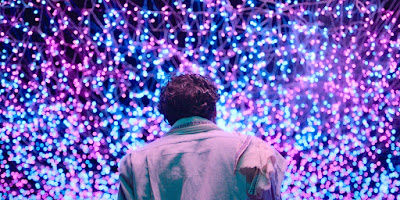 My next film was Ritwik Pareek’s Dug Dug (India, 2021). Both Vengeance is Mine, All Others Pay Cash and Dug Dug start with the sounds of a motorcycle. And I thought, “Hey, that’s neat.” Because I watched both movies in the same day and I enjoy themes. Both movies offer social criticism but Dug Dug is a straight up satire. Dug Dug shows the growth of a religious movement from a memorial shrine in rural Rajasthan to temples, businesses, charitable foundations and hospitals. Thakur Lal, drunk and stoned out of his mind, falls off his motorcycle. And thus begins a chain of events that lead to Thakur’s ascension as his motorcycle re-appears at the site of his accident. People decide that a miracle has happened. They build a shrine. Local officials get caught up in the popular fervor and the worship of Thakur Sa is noticed by television. 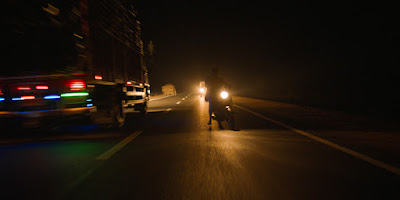 Pareek has a background in design and it shows in the film. Dug Dug leans into visual design, cinematography, music, sound and set pieces to tell its story. There are characters, but Dug Dug is not a strongly character-driven film. And I am fine with that. Different movies emphasize different things. I loved the use of pink and blue and the use of light. I loved the devotional art created for the film. And I’m pretty sure there’s a musical reference to Satyajit Ray’s fantasy adventure comedy, Goopy Gyne Bhagha Byne (1969), but it’s been a while since I have watched it. I also have to say that while I understand the criticisms of religious movements in the film, I also can’t help enjoying this new religious movement. I see the faulty basis, but I just love that motorcycle and the devotional paintings. This is not a failure of the film. The jaunty satire reminds me a bit of Juzo Itami’s work particularly, The Funeral (1984), A Taxing Woman (1987), and Minbo: The Gentle Art of Japanese Extortion (1992). But Pareek is less focused on the characters and more on Indian society. It’s a shame that Indian audiences won’t easily see Dug Dug given the way things are under Modi. 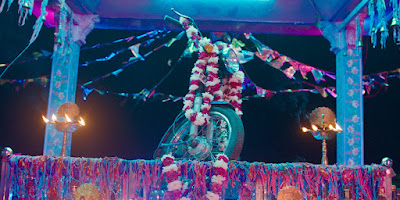 Posted by Robert Aaron Mitchell at 5:56 AM